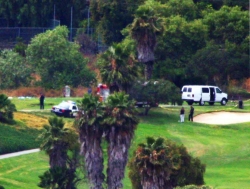 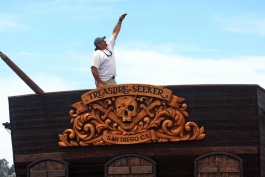 “That was a terrifying moment,” said McPherson, who was working on his boat when he heard the plane approaching. “It was just getting louder and louder, so I looked back and saw the plane about 50 feet above the ground, maybe even less. He barely missed our boat, which is 22 feet.“ The boat, a 49-passenger “pirate boat” with water cannons is set to launch in Mission Bay soon, he said. “We were going to put up a mast last weekend.” Had the mast gone up as planned, the ship would likely have been struck while he was working on it, he said. 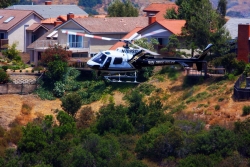 Two children seriously injured in the crash were air-lifted to Rady Children’s Hospital, the Union-Tribune reports. The pilot and a third child were transported to another area hospital. The plane had departed from Montgomery Field and was registered in Mesa, Arizona.

McPherson expressed hope that the pilot survived, adding that he was glad to see the plane come down without catching fire. “We’re praying for him,” the witness concluded.