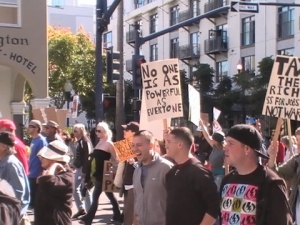 November 5, 2011 (San Diego) –“As of today, one million American consumers are hurling a lightning bolt at the big banks, moving their money out,” Diane Sawyer at ABC news reported Friday.

That report aired before today's target date set by the “Move Your Money” movement for consumers to strike back at Wall Street banks blamed for the financial meltdown. Across America, people are heeding the call, shifting their funds into credit unions or locally-owned banks.

In San Diego, around 150-200 people joined a protest rally and march through the financial district downtown this weekend.  Protesters closed their accounts and some cut up Bank of America credit cards, said Jerry Malamud, who provided videos of the Move Yor Money Day march and rally:
http://www.youtube.com/watch?v=Btcma4bphtg&feature=email
http://www.youtube.com/watch?v=IdjrNdSDhjM&feature=email 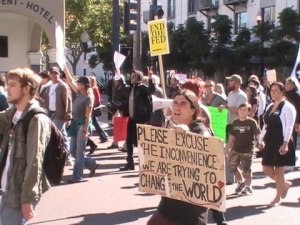 In October alone, credit unions opened accounts for 650,000 new customers –a 13-fold increase over normal. Those shifts came after the Move Your Money project (http://moveyourmoneyproject.org/ announced its goals but a full five days before today’s November 5 “Bank Transfer Day”, thus total assets transfers will ultimately be far higher.  The site includes links for customers to look up credit unions or community banks in their neighborhoods.

Last week, Lorena Gonzalez, secretary-treasurer of the San Diego-Imperial Counties Labor Council, led a group of union workers to close accounts at a downtown banking institution. Occupy San Diego protesters and others have joined in taking a stand against corporate greed by taking their money out of large banks such as Bank of America, Union Bank, Chase, Wells Fargo, and Citibank. 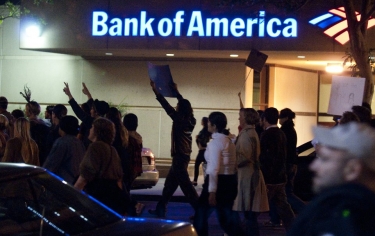 Many consumers have objected to banks receiving bail-out funds, only to pay out massive bonuses to executives. “Banks got bailed out, we got sold out,” protesters chanted.

ABC news interviewed one small businessman who moved $3 million in assets to protest his bank refusing a line of credit. Other consumers said they were protesting fees on everything from overdrafts to use of ATM machines. 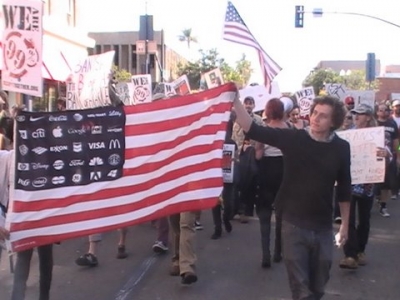 against big banks has spread rapidly over the Internet, including social networking sites such as Facebook and Twiiter.

“This venue was always open to us in the past,” East County resident Thomas Comeau observed in an e-mail sent to ECM’s editor. “So much of our power is hidden like this,” he concluded. “The powers that be are not omnipotent and we can bring them to their knees…if we'd just get up off our own.”

What about those consumers who chose not to close their bank accounts? Don’t expect to see rewards for customer loyalty.

“Big banks say that no matter what happens, they will have to recover those evenues," ABC news concluded, adding that banks are expected to raise fees even higher on their remaining customers.