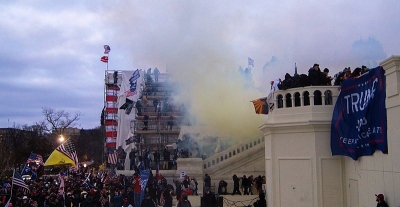 January 13, 2021 (San Diego’s East County) – Donald Trump is now the only president in U.S. history to be impeached twice. Today, 10 Republicans including Liz Cheney, the third highest ranking Republican, joined with Democrats int voting to  impeach Trump for “incitement of insurrection.” The action comes after a violent mob stormed the capitol with intent to halt the certification of Joe Biden as president.

Five people died in the invasion of the Capitol, including a Capitol Police officer, and dozens of officers were injured.  Some chanted “death to Pence,” the Vice President; one of those arrested had a semi-automatic weapon and had posted his intent to assassinate House Speaker Nancy Pelosi. President Trump, at a rally at the White House ellipse just before the violent takeover, urged his supporters to march to the Capitol and “fight” to halt the vote, also accusing Pence of cowardice if he did not certify the vote. Pence later returned that night and voted to certify the election with Joe Biden the winner, as did the majority of legislators.

Jacobs stated, “The president summoned a mob, directed them to the Capitol, and told them to ‘fight like hell.’ They did, and the results were tragic. Trump put my colleagues and me, and the nation at risk. He must be impeached.”

Issa, in his statement on the floor, stated, “What’s being debated is with 167 hours let until he [Trump] leaves office, is he a clear and present danger?  And the answer is, he clearly isn’t.” He accused Democrats of trying to punish the President for his actions over the past four years and blamed the capitol insurrection on “anarchists who came locked and loaded.” Issa earlier drew criticism from some for telling Fox News that "liberals" were "overplaying a lot of things, including the deth of these people on Capitol Hill." While he called it a "terrible event" and said "people need to be punished," he then deflected to critcize "unchecked violence on the left" related to racial justice protests.  Issa also voted against certifying the presidential election, rejecting Arizona's voters.

In his first impeachment, Trump was accused of withholding military aide approved by Congress to the Ukraine in an effort to coerce Ukraine's president to dig up dirt on Biden's son, Hunter. He was acquitted down partisan lines in the Senate.

But now, notably, Senate leader Mitch McConnell, a Republican has left the door open to conviction in the Senate, Associated Press reports. He stated that he has not yet made up his mind whether to vote for impeachment and will consider the evidence, though several major media outlets report that he has privately stated that he believes the President did commit impeachable offenses.  However McConnell also said today that he will not reconvene the Senate until the next scheduled session --after Joe Biden is President.

There is precedent for impeachment after an official leaves office.  Former U.S. Secretary of War William Bellknap resigned after evidence of bribery surfaced and was later impeached. Impeachment prevents an official from ever holding public office again, also prohibiting them from receiving a pension or other benefits.  George Hoar of Massachusetts, one of the floor managers during Belknap’s impeachment trial, argued, "“I believe the effect of this decision will be that for a century to come there will not be in the history of this country a repetition by a Cabinet officer or other high executive official of such offenses as have been disclosed and prosecuted in this trial."