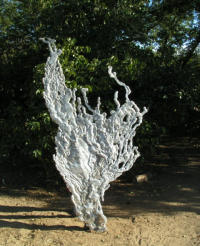 September 28, 2013 (Lakeside) – On the tenth anniversary of the Cedar Fire, community leaders and fire survivors will gather to dedicate a historic memorial commemorating the worst wildfire in California history.  The ceremony will take place on October 26 from 10 a.m. to 1 p.m.at River Park Fire Station #2, 12216 Lakeside Avene in Lakeside, a community that suffered devastating losses when the firestorm trapped people caught unaware of the inferno raging during the fire's first night.

The event will also honor first responders and celebrate fire survivor families’ lifelong connection as guests pause to “reflect, remember and reconnect.”  There will be exhibits, disaster prevention program information, book signings by Sandra Younger, author of The Fire Outside My Window, a VFW band, food and beverages, a moment of remembrance, and appreciation of community support. 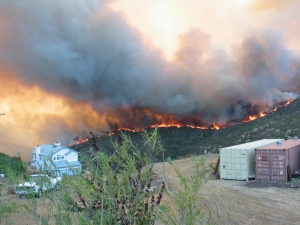 The Cedar Fire was the largest wildland fire in California history. It started 25 miles east of San Diego, in the Cleveland National Forest, when a hunter became lost and lit a small fire to signal for help on the evening of October 25. It quickly spread out of control.

By the time containment was declared on October 28th,  the Cedar Fire destroyed 280,278 acres, 2,820 buildings and killed 15 people. Damage occurred across the County, but nowhere was the toll more devastating than in Lakeside,  where the fire roared through the night catching many people unaware.

The Cedar Fire continues to hold the sad record as the state’s worst wildfire in acreage burned, homes destroyed and lives lost.

For more information on the memorial event, contact Lakeside Fire at 619-390-2350 or visit

It has been ten years since the Cedar Fire today.  Tomorrow is the beginning of Deer Season.

I put this video together years ago from a power point. Aside from the long pauses due to thePowerPoint conversion issues, if you wait through some pauses or just push it along , for the milestone remembered today,  here's  another moment,  remembering that last night from a world we left behind.   Below is the story that scrolls in the comment section on Youtube.
As mentioned one doesn't really say Happy Anniversary in this case.  The Cedar fire was tragic and terrifying. But it was some odd beginning or new found courage, internal evolution, all things that do in some odd way, like the wild lands they sprang from, bare celebrating, and passing on.
In the wake of the SDG&E Master Permit renewal, we hope the public outcry will demand at last the investment to put power lines as much as possible,  underground, for fire for wild character, or even better, the infrastructure is  migrated to the city altogether.
The Cedar Fire was started by a hunter who ran out of water on one of the hottest , driest weekends in one of the driest years on record.  He wasn't an out of control "arsonist".   He was no mindful "criminal"., Not that his was the wisest of choices, once dehydrated, his ability to think clearly was gone.   The real responsibility came at the front end, of the day-or the day before, not unlike the first step in the bar-room door.  How was he to know?   Well I don't know, not every hunter in the forest starts the largest fire in California history.  Granted he could have done better.
But what if he doesn't?   We all should do better on the education end.  The Forest Service? Well that would be logical.  But what if they don't all the time either?   ...
Last spring I gave water to MANY people in the back country that had not brought enough.  Three Sisters Waterfall is a living shrine to the gap in our interface with nature as well as the solid testimony to insatiable yearning to be there.   Was the man that lit the fire any different?  Many more people have found their way to this part of the forest than 10 years ago and many of them learned the hard way about bringing water. I've maintained it wasn't an issue specific to the hunter; anyone lacking the basic  skill set could have found themselves in that predicament. Dehydration usually comes as a surprise.  Avoiding it 'happens" hours before.

As a culture, we've lost our way in the woods.
Who started the fire? From a certain perspective we all did.
A connection to the wild our species came from should be recognized, not rationalized way too late.
If we don't embrace among other things some reintroduction – not fire into the chaparral ecology  -but reintroduction of the “reach- out-to- others -in the –wild- rules” , the human ecology where primitive collides with modern,  of outdoor-awareness-culture:  pack it out what you packed in -and more if you can Because that is the right thing to do, of asking people you don't know, are you ok;  a sense of cause and effect and our inescapable connection to it as a tool,  home, and salvation,  not a foe; of  some reaching out to rekindle our instincts in the wild, as well as  respect for it,  of  re-education of the awareness of a  birthright many don't know they have,  to connect with the environment we came from. If we don't tackle these challenges with individual ownership as well as the agencies held accountable, these ,  the REAL  root causes, a Cedar Fire could strike again.

Video Description, the story from that evening and the months that followed.

There are some places in the middle of this video-converted from PowerPoint, where the pauses are long, but fear not, it keeps going, either wait or push it along...  The Music is of course James Taylor form the Mud Slide Slim Album, one of the best there ever was.

I was on my way "out there" to go tell the Julian Sheriff that someone was dozing where they weren't supposed to about mile 14 just north of Boulder Creek Road between Descanso and Julian, and leaving cigarette butts on the ground.   I was motivated.   I knew Cedar Gorge well. I got to the Perkins store in Descanso at 6:00 to get gas and headed up Boulder Creek Road.  I was about mile 6 when here they came, the fire trucks making their way up Boulder Creek Road.  .... I thought about the cigarette butts and bull dozer wondering if the dozer operator had something to do with this.  The "Cedar Fire at that point was less than five or ten acres.

As night falls, fire looks much closer than it is, a bitter lesson I was about to learn.   I took some of the first photos taken of the Cedar Fire from Boulder Creek Road just above the McCoy Ranch.  There was one tree framing some of the photos that weeks later would serve to pinpoint where I was standing to later triangulate on the fire location.    I left the photo shoot and went back to tell the fire fighters what I knew about the gorge. After some deliberation the CDF command put me in a very large truck and off we went.   When we made it to the bottom of an incredibly steep hill in the access road it was first made obvious the fire-in- the --dark- phenomenon.  I felt horrible.  The fire way off in the distance still, they were no closer and time was churning on. It was about 8: 45 and the USFS fire chief showed up about that time coming up Cedar Creek Road.  He also had spent the last hours going up into Cedar Gorge to try to access the fire.  This one I did know, there was no way he was getting to that fire from there, he was lucky he decided to get the heck out of there, very lucky.    Cedar Gorge especially the remaining hours of what it had been, was as formidable as it gets.  I had hiked on Palomar with the USFS fire commander just the week or two before, in an event with the Sierra Club where he was talking on vegetation management and fire issues, of all things…

At 9;30 I  made my way over to Eagle peak Road.  I took pictures of the now spreading fire no longer at 10 acres, had spread about 2.5 miles across the gorge. So far I was above the fire and it was oddly not that imposing.  Then I proceeded to San Diego Country Estates thinking about pictures.  I didn't take any.   The whole scene changed, frighteningly.  I was suddenly on the proverbial "set" of the Burning of Atlanta in Gone with the Wind.  Horses, people cars, panic, stifeling smoke and a wall of heat.  I could not see the flames but I had no doubt they were there, an inferno now.  About that time the impending Santa Ana took hold and the fire began to move with momentum. -I'm no Scarlet either.  I have one saying:  If you're not having fun go home. Exit stage left.  Even as I got up past Mt Woodson and looked back I could see the fire on the move and wondered what was going to stop it.  I laid down exhausted about 2:30 am in North Park.  I awoke at 9 the next morning with the answer all around me.  Ash and a darkened sky like a partial eclipse.

I did not know that I would ever see the world I had embraced like family the decade before.

By contrast in 2005 we had the wettest year on record. The world transformed.  There was water flowing from every small canyon it could. Our Mediterranean system was temporarily transformed into the “NaPali Coast” on the western end of Kauai.  I made many trecks in the few years to follow but none more memorable than one night in December a few weeks following the fire. It was dusk and considerable fog was rolling in. Months before I met my first local, an encounter that changed everything about the way I saw the forest. With photo album in hand I was determined to put some gnawing things in perspective.   I was sure, and rightly so, this was where I would do it. There he was, no electricity, or running water, or propane, or gas to get his truck out.    It was a privileged moment, like few others, experiencing living history taking shape from the fog and ashes. He  lit an oil lamp in the kitchen of the oldest ranch in San Diego, one of the last remaining sources of oral history deep in the back country, surrounded by the blackened remains of the Cedar Fire,   we sat for the next two hours putting history back together one story at a time.