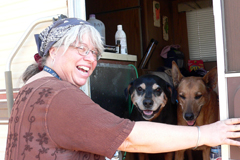 April 5, 2010 (San Diego’s East County) – Many area residents were awakened by aftershocks during the night following yesterday’s 7.2 earthquake in Mexico. In neighboring Imperial County, Calexico was the hardest hit U.S. city, with historic buildings in several blocks of downtown cordoned off and 80% red-tagged by authorities, Channel 7 news reports. In San Diego and East County, officials continue taking stock of damage and residents tell their stories.

“It was pretty darn strong out here,” said Jan Hedlun, a planning board member and resident in Potrero, located just a couple of miles north of the Mexican border town of Tecate. Hedlund said she went outside and “could see the land rolling and the electrical poles weaving.”

Gordon Hammers, also a Potrero Planning Group member, said the quake knocked items over at his Potrero home and shook up family members in Tecate. He said there have been infrastructure problems with phone service in Potrero, adding, “We have an Internet business here and we have three T1 lines bundled. Only two are functional at this time, so it’s running slower.”

At the Campo Indian reservation, tribal chair Monique La Chappa reported a broken window in the education center and a broken gas pipe; the latter occurred during this morning's aftershock.  "We had a lot of road damage. I noticed a lot of new cracks in Church Road," she added.

Crews are currently checking for potential damage at the Golden Acorn Casino and the wind farm on tribal land, she said, adding that the casino is built to tribal and international standards that are "better than state earthquake codes."  The wind farm, which recently was off-line due to wind damage from a winter storm, remains operational after the quakes, she confirmed.

In downtown El Cajon, a crack has been reported in a storefront window on Main Street at the former Salvation Army store site, said Monica Zech, spokesperson for the City. “Here at City Hall a few pictures popped off some walls on the fifth floor,” she said, adding,”Our Heartland Fire dispatchers ducked under their heavy desks during the shaking…Luckily they were not handling calls at the time.”

No damage was reported at the Viejas reservation, according to spokesman Robert Scheid.

SDG&E spokesperson Allison Zaragoza confirmed that power has been restored to all SDG&E customers by this morning in all areas serviced by the utility.  SDG&E has not responded to questions as to whether the utility sustained damage to any of its facilities in Mexico.

Mexican media now reports over 100 injuries and at least five deaths. A parking garage collapsed in Mexicali, which sustained heavy damage to homes and infrastructure from the quake and fires caused by ruptured gas lines or propane containers.

“Most indicators point to the Laguna Salada Fault as being the origin of yesterday’s earthquake,” Erik Pounders, a geologist with the U.S. Geological Service, told East County Magazine. Sunday’s quake, was more powerful than the Haiti and Northridge quakes. The Laguna Salada fault continues north of the border as the Elsinore fault through portions of East County near the border, then north near Pine Valley, Ramona and Temecula, splitting into the Chino and Whittier faults at its northernmost terminus.

The last major quake on the fault line occurred in 1992, when a powerful 7.2 quake struck the region.
Could the next big one occur in East County?

According to the Southern California Earthquake Center, the Elsinore fault is a right-lateral strike slip fault which has a probable magnitude of a 6.5 to 7.5 earthquake in the future—though when or precisely where is something experts haven’t predicted. The last major quake on the Elsinore fault was a 6.0 temblor in 1910 at Temescal Valley.

Quakes are not a good experience, the higher it gets on the Richter scale the worser and 7.2 is not a minor quake. It's sad to see all the debris. It is better to be well informed on quakes and what should be done in case a quake takes place. There are certain regions which are prone to earthquakes so we ought to have more knowledge earthquakes. Miami rentals