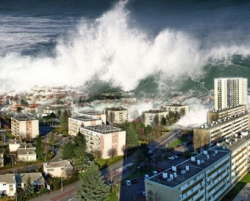 March 11, 2011 (San Diego) – Southern California beaches are closing this morning as a precaution following a powerful 8.9 earthquake that rocked Japan last night, killing hundreds from the temblor and a tsunami that subsequently struck Japan.

San Diego is currently under a tsunami advisory, a lower level than a tsunami warning.  The tsunami's impact is expected to begin between 8 a.m. and 9 a.m. locally and will continue for 10 to 12 hours after the initial wave arrival.

Tsunami warnings have been issued for countries and islands across the Pacific and much of the U.S. west coast.

The County Office of Emergency Services has been coordinating with the nine local coastal cities, the U.S. Coast Guard and Harbor Police. All agencies are advising the public to avoid beaches and coastal waters due to the likelihood of strong currents and waves in or near the water.

A tsunami advisory means wave heights are forecast to be from about one to three feet. Significant widespread inundation is not expected.While severe coastal flooding is not likely locally, tsunamis can carry debris such as large boulders from the ocean floor, posing hazards to those in the water or on shore. Also aftershocks pose risk of triggering new tsunamis.

People are encouraged to stay out of the water and away from the immediate coastline until after this event.  Authorities are discouraging people from going to the beach or harbors to view the event.

The public can 211 for information. The City of San Diego also has a hotline: 619-570-1070. Stay tuned to your local media source or NOAA weather radio for later developments. To learn more about the tsunami advisory, please visit http://wcatwc.arh.noaa.gov/.

The County Office of Emergency Services will update information on its emergency website at www.sdcountyemergency.com. You can also get information about what to do in the event of a tsunami at www.ReadySanDiego.org.

A tsunami warning remains in effect for many areas of the Pacific, including the Point Concepcion area along the California coast, where waves may reach 6-7 feet.

In Japan, the quake was centered in Sendei and is among the five strongest quakes worldwide since 1900, over a century ago. Hundreds of bodies have been reported along the Japanese coast, tall buildings have toppled and several fires are burning. Elsewhere in Japan, an oil refinery is in flames and a nuclear facility has been damaged and authorities cannot get water to cool it, prompting evacuations in the immediate vicinity. Millions of people are without power and travelers are stranded at the Tokyo airport. Numerous strong aftershocks have also struck, some over 7.0.

Coastal areas in Hawaii have been evacuated and the first tsunami waves are striking now. Thus far although a seawall on Oahu has been breached there is no damage to resort hotels or other properties yet reported. However higher waves are expected. Waves up to 7 feet have just been reported reaching Maui.

Authorities advise residents in coastal areas across the Pacific to stay off beaches and out of the water. If you see waters suddenly recede, it is an indication that a tsunami wave is about to strike.

A tsunami warning is in effect from Mexico south to Chile and from Point Conception north to the Oregon border. Warnings and watches have also been issued for islands and coastal regions throughout the Pacific, including Indonesia, the Philippines and Guam. An earlier tsunami warning issued for Australia and New Zealand has been lifted.

President Barack Obama this morning issued condolences to victims of the tsunami and quake. “The United States stands ready to help the Japanese people in this time of great trial. The friendship and alliance between our two nations is unshakeable, and only strengthens our resolve to stand with the people of Japan as they overcome this tragedy,” he said, adding, “We will continue to closely monitor tsunamis around Japan and the Pacific going forward and we are asking all our citizens in the affected region to listen to their state and local officials as I have instructed FEMA to be ready to assist Hawaii and the rest of the US states and territories that could be affected."

Small quakes are felt every day somewhere in Japan and people take part in regular drills at schools and workplaces to prepare for a calamity.But it was the big one.
Properties in India

Poor japan people, we pray for you !
Cisco CCNP