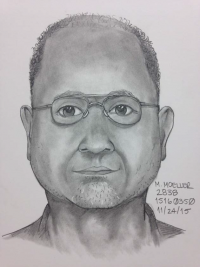 He never got out of the car. The girl was not able to get the license plate number of the car.

The girl describes the suspect as a heavy set, dark-skinned Black man between 65-70 years old. He was bald, but had a mustache and was wearing wire-rimmed glasses.

Anyone with information on the identity and location of the suspect is asked to call the San Diego County Sheriff’s Department at (858) 565-5200 or the Crime Stoppers anonymous tip line at (888) 580-8477. Crime Stoppers is offering up to a $1,000 reward to anyone with information that leads to a felony arrest in this case. Anonymous email and text messages can be sent via www.sdcrimestoppers.org.