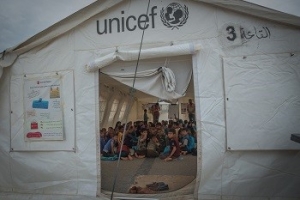 June 7, 2017 (San Diego) –  Iraqi forces backed by the U.S. are driving Islamic State (ISIS) forces from the stronghold in Mosul where the terrorists have held civilians captive for three years. But the toll is bloody.  CNN reports ISIS killed over 160 civilians in a single day.  Aerial photographs reveal  horrific carnage.

A UNICEF press release issued June 5th states, “Children are being killed, injured and used as human shields. Children are experiencing and witnessing terrible violence that no human being should ever witness. In some cases, they have been forced to participate in the fighting and violence. “An estimated 100,000 girls and boys remain in extremely dangerous conditions in the old city and other areas of west Mosul. Many are caught in the crossfire and hospitals and other medical facilities have reportedly come under attack. “

UNICEF is responding to the urgent protection needs of vulnerable children and families who are fleeing the conflict, including family reunification for children who have been separated from their parents or extended families, legal representation for children who have been detained by security forces, emergency psychosocial support and other specialized child protection assistance to distressed children.

The Guardian newspaper reports that civilian deaths  from U.S.-led strikes on ISIS have surged under the Trump administration.  Sixty percent of all civilian deaths in the three-year campaign against ISIS have occurred in the first three months of this year, with larger bombs reportedly being deployed by coalition forces.

“The killing of over 160 innocent civilians illuminates the desperation of ISIS in their effort to maintain Mosul,” says Mark Arabo with the Minority Humanitarian Foundation in San Diego, home to some 60,000 or more Iraqis displaced from their homeland by war.  “Our thoughts and prayers go to the innocent civilians murdered by ISIS in cold blood.”

Arabo adds, “These civilians murdered by ISIS were not combatants, and were simply trying to flee the terror of Mosul. Those that fled were met only by a cold bullet t the hands of ISIS.  We, as a global community need to disavow any of these actions, especially in a warzone like Mosul. We must stand for innocent civilians and facilitate any attempts they may make to flee.”