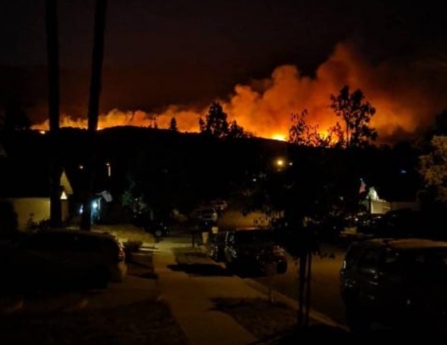 Photo: L.A. County Fire Ops
October 11, 2019 (Los Angeles) – The #SaddleridgeFirein Los Angeles has scorched 7,500 acres and forced an estimated 100,000 residents to flee 23,000 homes in the Granada Hills, Porter Ranch and Sylmar areas in Los Angeles County.  The fire has burned at least 25 homes and is 13% contained.  One resident died of a heart attack in the fire and a firefighter suffered an eye injury, the Los Angeles Times reports.

The blaze has shut down northbound Interstate 5 at State route 118 and the 118 freeway form Balboa to DeSots, as well as the 210 freeway between I-5 and the 118 freweay. Traffic is slow on other freeways including 101 and 126. For current traffic conditions in the area visit http://quickmap.dot.ca.gov

The fire began around 9 p.m. last night near the 210 freeway’s Yarnell Strett exit in Sylmar. Today the inferno is burning 800 acres an hour as it approaches Santa Clarita, fueled by winds in excess of 65 miles per hour.
As residents flock to emergency shelters several have reached capacity. More than 1,000 firefighters are battling the blaze, with 25 rescue ambulances assisting in evacuations of elderly and disabled patients, CBS News reports.
A troubling concern is the Aliso Canyon storage facility, where SoCal Gas reports its gas storage facility is safe, but has been evacuated.  Firefighters are in place to defend the facility and work to prevent explosions from wellheads.
Anyone who wants to receive emergency alerts about the Saddleridge Fire can text READY to 888-777 or sign up at emergency.lacity.org/notifyla.