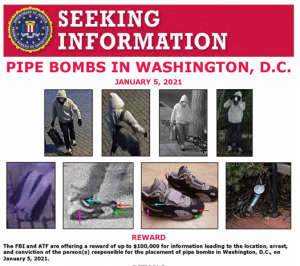 January 4, 2022 (Washington D.C.) – As the anniversary of the violent capitol insurrection last January 6 approaches, federal authorities seek public help to find a suspect who planted two pipe bombs near the Democratic and Republican national committee headquarters in Washington D.C. the night before. A $100,000 reward for information leading to the arrest of the person(s) responsible for planting the bombs is being offered by the Federal Bureau of Investigation (FBI)  and the Bureau of Alcohol, Tobacco and Firearms (ATF).

Between 7:30 and 8:30 p.m. Eastern Standard Time on January 5, surveillance cameras indicate the suspect planted the bombs while wearing a grey hooded sweatshirt, face mask, gloves, and a pair of black and light grey Nike Air Max Speed Turf shoes with a yellow logo.

Steven Sund, who was chief of the US Capitol Police at the time of the insurrection, theorized that the bombs were planted as a distraction.

A sleuth interviewed by Business Insider has estimated that the suspect, probably male, had extremely large feet, wearing size 16.5 or 17.

If you have any information, contact the FBI toll-free tip line at 1-800-CALL-FBI  (1-800-225-5324) or submit tips online at tips.fbi.gov.  You can also contact your local FBI officer, or the nearest U.S. embassy or consulate. Tipsters can remain anonymous.