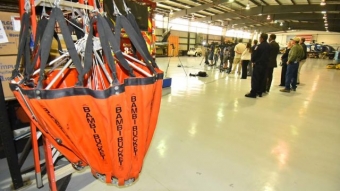 By Ken Stone, originally published at Times of San Diego, a member of the San Diego Online News Network 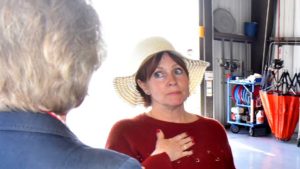 It was the 10th anniversary of the San Diego County Fire Authority, and a chance for officials to note the agency’s progress while warning of another dangerous fire season.

But after Supervisor Dianne Jacob, County Fire Authority Chief Tony Mecham and a volunteer coordinator finished speaking before TV cameras at the Gillespie Helitack Base, Foss got fired up.

Foss called Cal Fire’s contentions of response times of just over 10 minutes “garbage” and said 14 Cal Fire vehicles in the unincorporated region of 1.5 million acres equated to one truck with two or three firefighters per 107,000 acres.

The Julian fire station — under the last volunteer fire agency in the area — is dedicated to Julian, she said in the Sheriff’s Department facility in El Cajon, “and we can’t wait 30 minutes for Cal Fire…. Someone’s going to die.”

In late May, Van Natta posted on Facebook: “All citizens that care about our fire department, we need you to help by getting petition signatures to stop the dissolution or at least get it on the ballot. … We are ‘Calling All Angels’ … to help!”

Jacob, wearing her usual bluejeans to a rural function, reminded the public: “It’s not a question of if we’re going to have another firestorm, it’s a question of when.”

But she crowed: “We here in San Diego have more locally based firefighting resources than anywhere in the nation. That’s a big deal.”

In their remarks, Jacob and Mecham made no reference to efforts to dissolve the Julian-Cuyamaca Fire Protection District. Neither did Teresa Greenhalgh of Jamul, volunteer program manager for the County Fire Authority.

Instead they referred to the “crazy quilt” (Jacob) and “patchwork quilt” (Mecham) of rural fire districts before 2008 and the launch of the County Fire Authority, which contracts with Cal Fire for wildland fire and emergency response services.

After the news conference, however, Jacob made it clear that Julian residents would have final say on their fire district’s fate.

“If they want to stand alone, that’s up to them,” she said.

But she stressed that if Julian stays independent, it will still have a relationship with the County Fire Authority — just as the agency has with the other independent fire districts and cities.

“No different,” she said.

The longtime supervisor pushed back against accusations of Cal Fire fudging response-time stats.

She added: “I would hope the people of Julian look for the facts, look for the truth and make an informed decision.”

“No, we’re going to continue to operate our system,” he said. “I certainly hope they join the system. But if not, we’ll look for opportunities to support each other in the future.”

Amid worries that Cal Fire was engaged in a “takeover” of Julian’s volunteer fire department — a video (see below) posted June 4 makes a 4-minute case — Mecham said he’d been in Julian on Tuesday to meet with reserve firefighters.

“At the fire station level — which is what’s important to me — they’re all getting along,” he said of the lower-level trainees and his professional Cal Fire staff.

(He acknowledged that he hasn’t talked to the Julian staff who do the real response work — “about 10 volunteer firefighters left in the program.”)

“As leaders, our responsibility [is] to not let this [dissolution] issue affect the day-to-day service,” Mecham said. “I was really optimistic both for the Cal Fire staff there and for the Julian Reserve firefighters that they see the bigger picture.”

He said a lot is to be gained.

“And even if the district ends up not coming into the county, I’d like to think that in the six months we’re there, we’re going to leave it a better place,” having provided training to career-firefighter hopefuls.

“If it doesn’t work out, we’ll leave whatever we’ve done there,” he said. “[We’re] ultimately there to benefit the community.”

“Those are confidential personnel matters that I can’t discuss,” he said.

The event — which will honor Southcott and other volunteers — aims to fatten a war chest to keep the Julian fire department independent.

“Please bring the family and enjoy a fun night of good food, entertainment, and memories to share with your families,” said “JCFPD and Supporters.”