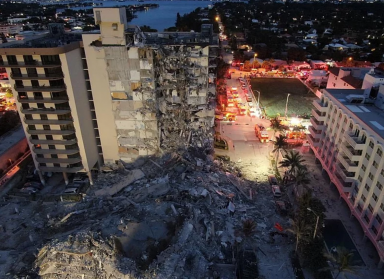 June 28, 2021 (Miami) - Two additional bodies were recovered from the wreckage of a 12-story oceanfront apartment building that partially collapsed last week in Surfside, Florida, near Miami Beach, bringing the current death toll to 11.

A section of the building containing about 55 apartments collapsed in the predawn hours last Thursday.

Levine Cava announced the latest body count during a media briefing near the scene of the collapse. Rescue officials say the body was recovered as search crews removed rubble in what they called a delayering process to search for remains or possible survivors. The mayor stressed the numbers are "very fluid" and expected to change.

Asked why the process is going so slowly, Miami-Dade Fire Rescue Assistant Ray Jadallah said searching the wreckage is not simply a matter of moving large slabs of material but of going through pulverized concrete. He said much of the search is conducted by hand, and every time material is moved, other material falls into its place.

Jadallah said the process is also dangerous, saying a search and rescue worker Sunday tumbled 7 meters into an opening in the rubble. The crews have now been on the scene for more than 100 consecutive hours.

The mayor said the pace of the search process is the main question she gets from families of the missing. She said family members and loved ones have been brought to the scene to observe the process. Workers continued to use rescue dogs and sonar to find possible survivors who were living in the south building of the Champlain Towers condominium complex.

Published reports have indicated that there had been warnings regarding the structural integrity of the building long before the collapse. Local, state and federal officials at the news briefing all promised a thorough investigation into the cause of the structural failure of the building.

The Associated Press, and the Reuters news service contributed to this report.