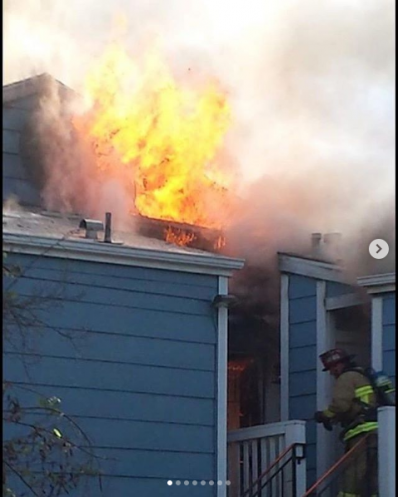 By Miriam Raftery
September 8, 2019 (Spring Valley) – San Miguel Firefighters were first on the scene after multiple reports of an apartment fire this morning at 8:30 a.m. in Spring Valley, arriving to find heavy smoke from the first and second floors of a 12-unit complex on Jamacha Blvd. near Trace Rd.
San Miguel called for a second alarm, directing crews to attack the fire from several sides of the structure, including vertical ventilation, the agency posted on Instagram. The fire quickly spread to the roof, but crews reportedly limited losses through aggressive actions. Three units sustained heavy damage and nine others had smoke damage.
During a search of the main fire that the fire had scorched, crews found a dog under a bed and were able to resuscitate the pet thanks to two tanks of oxygen and CPR, NBC 7 reports.
Residents knocked on doors to alert neighbors, some of whom were still sleeping when the fire began.  A civilian was injured, but released at the scene, according to San Miguel Fire.
Other agencies that responded to the call are Heartland Fire, San Diego Fire Dept., AMR medical, SDG&E, California Highway Patrol,  San Diego Sheriff, and the San Diego Red Cross, which is assisting displaced residents.