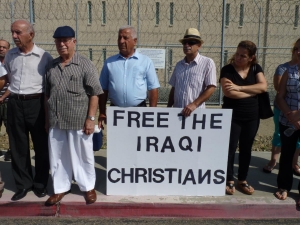 August 12, 2015 (Otay)—The San Diego Union-Tribune reports that an immigration judge has ordered that 12 of the 27 Iraqi detainees at the Otay Mesa Detention facility be deported.

Immigrations and Customs Enforcement spokesperson Lauren Mack refused to provide details on why the Iraqis were ordered deported, but told the Union-Tribune that two women are accused of giving false statements to immigration officials, including one who failed to disclose that she had been granted citizenship in Germany.

Most and perhaps all of the Iraqi detainees at Otay are Chaldean Christians who fled brutality by ISIS and genocide. They came to America seeking asylum and safe haven with relatives here in San Diego and East County.  Local Chaldeans held a rally last week outside the prison facility, seeking freedom but instead, they now face the prospect of never being unified with their loved ones.

But there is some hope on the horizon, since ICE has indicated that those ordered deported will likely not be sent back to Iraq, where they would face persecution and potentially death. Instead, they will be sent to countries that provide safe haven to Iraqi refugees, including Australia, New Zealand, Jordan, Lebanon and Turkey, according to the Union-Tribune.