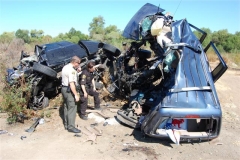 May 30, 2011 (Lemon Grove) -- The Avoid the 14 – San Diego County DUI Task Force conducted a DUI/Driver’s License Checkpoint Sunday evening on Broadway in Lemon Grove in conjunction with the Memorial Day holiday period.  A total of 1165 vehicle drivers were contacted during the checkpoint. The operation resulted in two DUI arrests, one warrant arrest, one arrest for public intoxication and 10 for drivers operating vehicles while their driving privileges were suspended or revoked. In addition, 14 vehicles were impounded.

Mothers Against Drunk Driving (MADD) volunteers assisted at the checkpoint by handing out DUI information to the motorists.

“This was considered a successful operation, both in number of impaired drivers and dangerous drivers removed from the street, and also in the amount of public awareness generated,” stated Sergeant Herb Taft. The Avoid the 14 law enforcement agencies will be continuing their efforts to keep drivers in our communities safe, he added.

For more information on local and statewide Avoid DUI Task Force Campaign enforcement schedules and daily DUI arrest/fatal stats, visit the www.californiaavoid.org. The Program is funded by the California Office of Traffic Safety, which reminds the public to report drunk drivers by calling 911.