TWINS, PREEMIES, YOUNG BABIES & INFANTS WITH COLDS MOST AT RISK 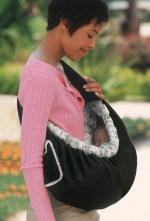 WASHINGTON, D.C.- The U.S. Consumer Product Safety Commission (CPSC) is advising parents and caregivers to be cautious when using infant slings for babies younger than four months of age. In researching incident reports from the past 20 years, CPSC identified and is investigating at least 14 deaths associated with sling-style infant carriers, including three in 2009. Twelve of the deaths involved babies younger than four months of age.

Slings can pose two different types of suffocation hazards to babies. In the first few months of life, babies cannot control their heads because of weak neck muscles. The sling's fabric can press against an infant's nose and mouth, blocking the baby's breathing and rapidly suffocating a baby within a minute or two. Additionally, where a sling keeps the infant in a curled position bending the chin toward the chest, the airways can be restricted, limiting the oxygen supply. The baby will not be able to cry for help and can slowly suffocate.

Many of the babies who died in slings were either a low birth weight twin, were born prematurely, or had breathing issues such as a cold. Therefore, CPSC urges parents of preemies, twins, babies in fragile health and those with low weight to use extra care and consult their pediatricians about using slings.

Two months ago, the Commission added slings to the list of durable infant products that require a mandatory standard. Additionally, CPSC staff is actively investigating these products to determine what additional action may be appropriate. Until a mandatory standard is developed, CPSC is working with ASTM International to quickly complete an effective voluntary standard for infant sling carriers.

CPSC recommends that parents and caregivers make sure the infant's face is not covered and is visible at all times to the sling's wearer. If nursing the baby in a sling, change the baby's position after feeding so the baby's head is facing up and is clear of the sling and the mother's body. Parents and caregivers should be vigilant about frequently checking their baby in a sling.

CPSC is interested in receiving incident or injury reports that are directly related to infant slings. You can do this by visiting www.cpsc.gov/cgibin/incident.aspx or call CPSC's Hotline at (800) 638-2772.