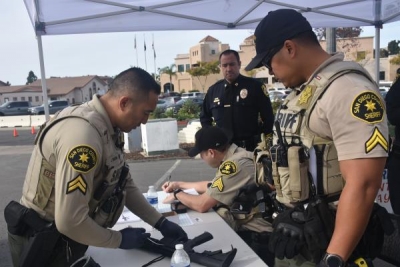 December 4, 2022 (La Mesa) -- At 9 a.m. on Saturday, Dec.3, cars pulled into the parking lot across from the La Mesa Civic Center with guns that the drivers wanted to unload.  Organized by the San Diego County Sheriff and the City of La Mesa, assisted by El Cajon police, the event resulted in 160 firearms handed over in exchange for gift cards to Target stores.

As more and more people began arriving, law enforcement members and volunteers screened drivers, asking why they were there, what kind of guns they brought and how many.

One person said that she was glad that La Mesa had the event because she had no desire or room to store a pistol and rifle that had belonged to her husband’s father. Another driver wanted to relinquish a gun he had purchased because he thought it was a valuable collector’s item, but that turned out not to be the case. 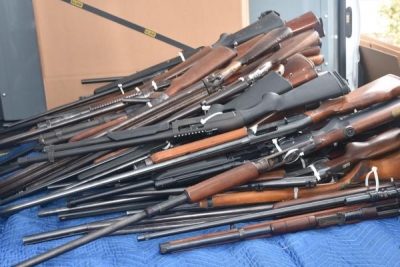 Cars then progressed to where an officer would carry the gun from the car to the inspection table.  Upon inspection, officers recorded information about the weapon, its make and model and its serial number. Police determined if the gun was real or a ghost gun. Guns could be turned over anonymously.

Ghost guns, which can look very similar to other guns, arenot yet illegal in California, are self-manufactured, and can be possessed without background checks or regard to age and criminal record. Although Governor Newsom signed AB 1621 into law on June 30, 2022, some other critical provisions will become effective on January 1, 2023.

Once it was determined that the gun met the buy backrequirements, the gift cards were given out: a $100 gift card for pistols, rifles, and shotguns, and a $200 gift card for assault weapons and ghost guns.

All weapons will be destroyed.

At least two Retired Senior Volunteer Patrol members were helping out, directing traffic and answering questions.  One volunteer remarked that La Mesa is a “pretty safe city,” but acknowledged that there had been a few recent shootings. 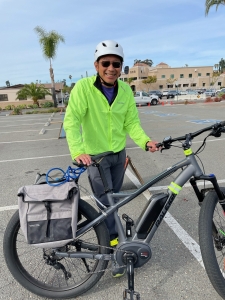 La City Councilmember Jack Shu (photo, left) commented that “If anyone saw what was in the back of that van, they’d know how important this (event) is.”  Shu, a supporter of gun violence prevention, also talked about the prevalence of suicide among two groups—single Latinas, and Asian teens, implying that ridding the city of unwanted and dangerous weapons is a step in the right direction.

The Gun Buy Back event ended at 1 p.m. on Saturday.

The number of weapons collected was down from previous events, but there had been a Gun Back Day not too many months before Saturday’s.  Representatives from San Diegans for Gun Violence Prevention handed out pamphlets that described the risks of irresponsible gun ownership, gun ownership laws and safe storage. 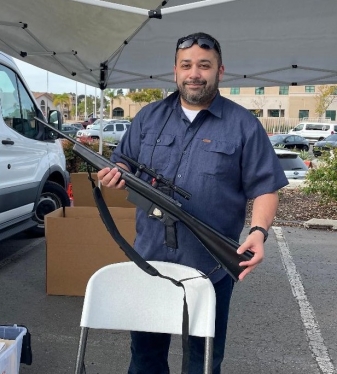 For a Saturday morning in East County, a day when pre-holiday shopping and December Nights in Balboa Park might have been top of mind, the attendance at Gun Buy Back Day can be seen as a positive step toward making the community safer.