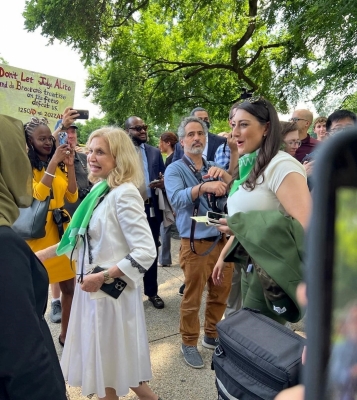 July 19, 2022 (Washington D.C.) – Seventeen members of Congress including San Diego Congresswoman Sara Jacobs were arrested today during a peaceful protest outside the U.S. Supreme Court over its controversial ruling that overturned Roe vs. Wade and allows states to ban or restrict abortions.

Jacobs, a Democrat, posted on social media, “Today I was proud to join my colleagues and take a stand for reproductive rights. Being arrested won’t deter us from this fight. We will not stop until we get these #BansOffOurBodies.”

Video showed protesters sitting down in the street in front of the high court. Capitol Police have said the demonstrators were arrested for obstructing traffic, after several warnings were provided. A total of 35 people were arrested including 17 Congressional members.  The demonstrators wore green bandanas, symbolic of reproductive rights.

Polls show that the vast majority of Americans oppose the high court’s abortion ruling, which does not require states to authorize abortions even when a woman’s life or health is at stake, such as with ectopic pregnancies or a failed miscarriage, where sepsis infection is a danger. Nor does it mandate abortion access for victims or rape or children impregnated due to incest.

By finding that the Constitution does not contain a right to privacy, the high court also opened the door to bans on birth control, gay marriage, and other presently protected rights. Jacobs has introduced a bill to protect birth control access and voted for bills to protect gay rights and abortion access,  but it appears doubtful these will make it through the Senate, where Republicans can likely block action via  a filibuster.

Congresswoman Jacobs has called the ruling by the conservative majority on the high court  “one of the most destructive, regressive, and shameful decisions made by the Supreme court in our nation’s history.  As one of the few women of reproductive age in Congress, this attempt to strip people of their bodily autonomy is personal.”

On her Facebook page, dozens of constituents have weighed in as of this evening. Nearly all voiced support, with a handful opposed.  Here is a sampling of the comments:

“I am so proud of you, Sara…The fight for women's rights was my fight. I am now one year from 80 and furious that reproductive rights have been removed. Keep on the fight, dear Sarah… “ --Jenifer West Delsen

“Good Trouble! Keep it up our daughters deserve their own Rights! We will not accept this Extreme Court Ruling!” – Bonnie Lang

“Thank you, Sara!  Stand up for justice!” --Rachel Zahn 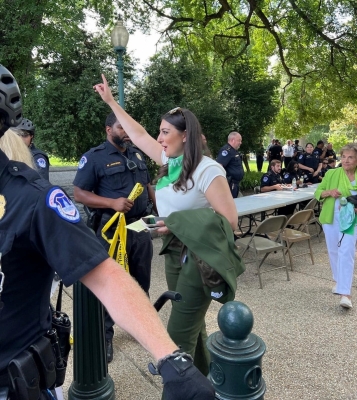 “Yes CONGRESS MEMBERS! Arrested in larger numbers for civil disobedience – NOW this must continue and grow in numbers everyday (how MLK worked it – large numbers) – we need dr’s, nurses, all who will challenge this court that they cannot threaten us over an UNJUST law. we are ordered now by religious tyranny…”  --Cindy Hadden

“Though I support protests for reproductive rights, I do not support Improper Leadership in obstruction of traffic or other laws at that level of Representation.” --Audrey Andujar

“…Must be nice to break the law without fear for your life. You were taken to a shady area to be processed and quickly released. If you were a person of color, you would have been violently detained and held for months without bail. Be better Congresswoman.” –Mark Doyle

No. When you get arrested you go to booking. None of that happened. "..this court that they cannot threaten us over an UNJUST law. we are ordered now by religious tyranny…” what a bunck of crap. The Supreme Court did not make a law. They made a rueling that the work abortion was not in the Constution. If you are going to protest something don't look stupid.

on why it happened the way it did. they have been doing it this way for many years, does not matter who the current administration is..........."According to a Capitol Police spokesperson, no one arrested in the incident was handcuffed, “as is standard for a noncustodial arrest.”
When they were escorted off they held their hands behind their backs to make it appear they were handcuffed. Then AOC broke ranks and raised her hand to wave at the crowd. They were cited for obstructing traffic and protesting without a permit.

whlie covering an anti-war march during the Bush administration where San Diego activists participated.  Some were zip-tied and kept on a bus, where pizza was ordered in.  All were released by morning with around a $100 fine.  DC police are used to large protests and are generally professional in how they cover such matters.  Among those arrested when I was reporting that event were a priest, peace activists, victims of Hurricane Katrina, and Gold Star moms who lost children serving in the Iraq War, including Cindy Sheehan.  None were violent; they staged essentially sit-ins outside the White House.