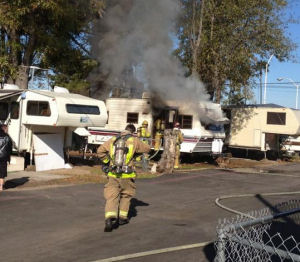 January 15, 2013 (El Cajon)--At 9:47 a.m. yesterday, Heartland Fire & Rescue crews in El Cajon responded to reports of fire in the 400 block of Van Houten Avenue in the City of El Cajon. As crews responded, heavy smoke could be seen rising from blocks away. The fire was located at the Evergreen Mobile Home & RV Park on Van Houten, where they found a trailer home in flames.

The fire was knocked down in less than ten minutes. A 17 year-old neighbor, who attempted to extinguish the blaze before fire crews arrived, was transported to the hospital with a non-life threatening arm injury. No one was home at the time of the fire and no other injuries were reported.

The trailer home is considered a total loss. Damage has been estimated at $5-thousand dollars. Heartland Fire & Rescue crews were assisted by fire crews from Santee and CAL Fire. The cause of the fire is now under investigation.