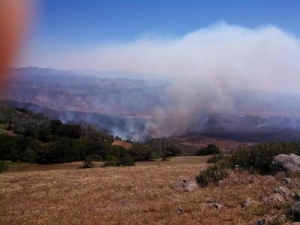 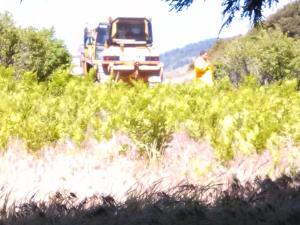 “Something will have gone out of us as people if we ever let the remaining wilderness be destroyed.” – Wallace Stegner

May 24, 2013 (Julian) Updated May 29, 2013 – The quote above is inscribed on the Volcan Mountain Foundation webpage, a site devoted to protecting the wilderness preserve. But today, as a raging wildfire that started as a controlled burn encroached, bulldozers were ordered to cut a firebreak on the crest of Volcan Mountain, ECM has learned.

Meanwhile an ECM investigation has raised growing questions over whether this fire could have been prevented.  Those questions include:

Craig Maxwell, owner of Maxwell’s Books in La Mesa, enjoys hiking on Volcan Mountain. He e-mailed a photo taken from the crest late this morning, showing the swiftly approaching flames.

“I spoke to a BLM firefighters who said the fire is far from being controlled and is still moving west up the hill toward Julian,” Maxwell stated in an e-mail to ECM. He also sent a photo of a bulldozer in a field of lush vegetation—preparing to cut a firebreak along the crest.

As of this evening, ECM has been unable to confirm whether the firebreak was actually bulldozed through the wilderness preserve and if so, how much damage was done. 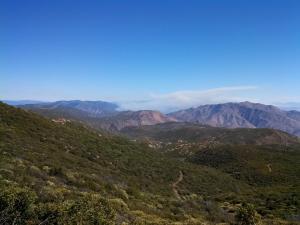 The fire is currently burning six miles west of Ranchita, per scanner traffic.  More resources have been requested for Volcan Mountain including two air tankers, four battalion engines, four bulldozers and two strike teams as the fire continues  to blaze through the backcountry tonight.

ECM spoke with Jimmy Tager, a meteorologist at the National Weather Service in San Diego.

“We issued a wind advisory from 4 p.m. Wednesday to 2 a.m. Thursday,” he stated.  The area where the fire began had wind gusts of 45 to 50 miles per hour during that time period, with sustained westerly winds of 20-30 mph.

Cal-Fire asked the NWS for a fire weather spot forecast before commencing the burn on Thursday morning.  For Thursday, the NWS predicted winds of 5 to 10 mph with gusts to 25 mph.

But the NWS relied on data from wind measuring devices in other areas.

“We have a handful of observation sites around the area, but we don’t have one in that valley,” Tager told ECM.  “We don’t have any more to put in more stations,” he said, adding that SDG&E has installed stations in some areas recently, but not the location in question.

Asked what other stations reported, he replied, “We have sites at Julian and Volcan Mountain. They wre reporting west-southwest winds the whole time, strong up by the peak, less down by the valleys.”

He was not able to confirm through measurements Cal-Fire's statement to media that a strong gust of wind and change in wind directions caused the fire to surge out of control, due to lack of equipment and variability with terrain.

“When we do fire weather spot forecasts for a controlled burn, where we get our forecast data is from certain 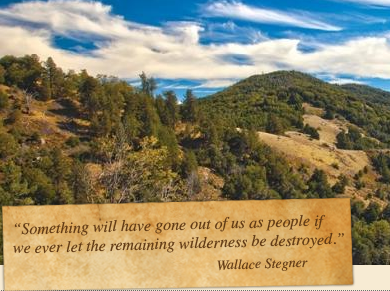 pixels on a map…with all the terrain varying so much, we look at surrounding points with observations and try to tweak it to the best that we can do.”

Could more wind measuring stations have provided information that might have dissuaded Cal-Fire from conducting  the controlled burn, which was reported by Cal-Fire to have gotten out of control late Thursday morning?

The out-of-control “controlled” burn may also reignite debate over Cal-Fire’s controversial proposal to dramatically increase the number of acres it clears statewide—a plan that has drawn criticism from some environmental organizations due to habitat destruction.

Greg Schuett, vice president of resource management at Volcan Mountain Foundation, says his organization generally favors controlled burns to reduce risk of catastrophic fires and has conducted its own burns.

But he raised a troubling question over this burn. "We're not sure why it was done after the burn season closed. We do prescribed burning oursevles but we wait for ideal content- high moisture and low winds. We were told by Cal-Fire that we could no longer do our pile burns...Why are they burning in May?"

Schuett said the foundation also objects to bulldozing, which destroys habitat. "I'm not sure how effective it is, " he added. "Bulldoze a ten-foot swatch and it jumps right over it."  He also raised concerns over Cal-Fire's plan to clear "tens of thousands of acres of chappaaral. We're entirely opposed to that. We're not in favor of eliminating whole ecosystems just because they are susceptible to fire."

"Why in the world would you burn in the driest of all seasons?" he asked. "There are so many times when `controlled' becomes uncontrolled,' he said, adding that there are stories of back fires burning down homes. (Editor's note, this occurred during the Poomacha Fire in 2007 with a burn reportedly conducted by Forest Service officials, multiple witnesses have previously told ECM.)

Supervisor Dianne Jacob had this to say.  "It's unfortunate that an unexpected wind shift caused the prescribed burn to go out of contorl, but I trust the judgment of Cal Fire professionals who regularly carry out these burns without a glitch I also trust they ahve the expertise and resources to respond in those rare occasins when things dont go as planned."

The fire that threatened Volcan Mountain began along Highway 78 near the Overland Stage Route and burned close to Ranchita, an area that suffered severe wildfires last year, making the additional habitat and wilderness loss all the more painful for area residents.  Local wilderness has also been encroached upon by large energy projects and developments , as well as additional wildfires in recent years.

Yes, another perilously close call with a priceless piece of wilderness. When are are we going to stop rolling the dice with the things we can't afford to lose?

Controlled burns are meant to prevent uncontrolled wildfires, not cause them. I have an idea: from this day on, let's not purposefully set fires on windy days.