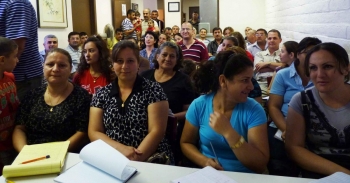 August 3, 2010 (San Diego) – Over 3,800 disabled and elderly refugees who came to the U.S. legally, all victims of persecution or torture, have been notified that they will lose Supplemental Security Income (SSI) on October 1st. Those slated to lose benefits include about 1,800 Iraq War refugees living in East County.

“They don’t have any other income. They want to find work and they can’t. They are too old and too sick,” said Joseph Ziauddin, president of the East County Refugee Center in El Cajon. Ziauddin estimates that there are around 40,000 Iraqis now living in East County.  Asked how many of East County’s Iraqis are currently refugees, he replied, “Ninety percent.”

Most are Chaldean Christians, though Assyrians, Arab Muslims, Shiite, Sunni, Yazedy and Turkish Iraqis also now call East County home. About 5% of the local refugees will be impacted by the upcoming benefit cuts for disabled refugees and those over age 64, he estimated. That's around 1,800 people.  Many suffered serious injuries in the Iraq War--a war launched by America against their homeland.   Those who fled Iraq suffered wounds from gunshots and bombings; brain injuries and mangled limbs are common.

So are mental problems,including post-traumatic stress issues similar to those suffered by combat troops. Some women and children have also suffered horrific ordeals.

“They have been through a war. Do you think they are normal?” Ziauddin shook his head. “In Iraq, you would see parts of bodies in the streets, explosions. My son, a few days ago his face was burned in a checkpoint bombing…We have one woman here, because she was not a Muslim, they raped her in front of her husband and children. Then they left her naked and cut him up into little pieces in front of her.”

San Diego is now the largest center for refugee relocations in the U.S., having recently surpassed Los Angeles. In addition to Iraqi refugees, our region includes refugees from other Middle Eastern nations as well as from Southeast Asia and African nations such as the Sudan and Somalia. All came here legally—and all fled persecution or torture.

Most don’t speak English when they arrive. At the East County Refugee Center, a classroom is filled all day, every day with refugees taking English classes, all hoping to find work, but there are not enough jobs.

Benefits for refugees are limited to seven years. Refugees may apply for citizenship in their sixth year, but delays are common. Some are too old or have mental problems that prevent them from learning enough English to pass the citizenship exam.

A short-term extension of benefits was approved by Congress two years ago. But that runs out in October, and letters have been sent to some 3,800 refugees nationwide advising them that their benfits will soon expire. Those who can prove they have applied for American Citizenship and that their case is pending may be able to get an extension for an additional year, said Christine Seisun, international affairs editor for Westlake Malibu Magazine and former community outreach association with the San Diego Red Cross, including outreach to San Diego’s refugee communities.

“I find it more than unfortunate and a little embarrassing that President Obama has allowed this legislation to lapse,” said Seisun, noting that Obama previously cosponsored a bill to help refugees when he was in the Senate.

So far, no member of Congress has introduced a bill to extend the benefits.

Congressman Bob Filner’s office did not return ECM’s calls inquiring whether he might introduce such legislation.

Congressman Duncan Hunter representative Joe Kasper said the House could consider a proposal to extend benefits again if the Democratic leadership is willing to move a bill forward.  “Congressman Hunter is certainly open to considering an extension, but his vote would largely depend on whether costs are appropriately offset.”

Ziauddin expressed surprise that Hunter’s office had not heard from more people. He recalled a time last year when the federal government was on the verge of cutting off cash benefits for all refugees. Ziauddin called around 20 Congressional representatives, he recalled. “I said, `You are putting our people in the streets. Think about it—do you want people with children to sleep n the streets?’ They changed their minds.”

Now he hopes they will change their mind again, and grant an extension to help the elderly and disabled. But more help is also needed for healthy, younger refugees such as Raad Jajju, who came here eight months ago with his family. “I’ve been volunteering here,” said Jajju. “I applied for about 100 companies, and there are no jobs.” In Iraq, he worked as a translator for the U.S. military for two years and for private security companies. “I served the flag,” he said.

This year, another 20,000 Iraqis (4,000 families) have been approved to come to San Diego County, Ziauddin said. “But there are no jobs here.” He believes the U.S. government should put people to work in Iraq to help rebuild his war-torn country. “They just want peace,” he concluded.