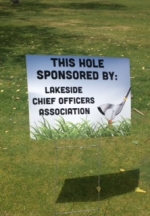 May 8, 2014 (El Cajon)- On May 6th, 49 firefighters from the Lakeside Firefighters Association teed off in a benefit golf tournament at Cottonwood Golf Club to help Stoney’s Kids.

Besides golf, the event also included a raffle, silent auction, giveaways, and a new car for anyone who got a hole in one. There was a contest for the longest drive, closest to the pin, and putting. Following the tournament, a dinner and reception took place.

Russo has been a firefighter with Lakeside Firefighters Association for 15 years. David Csik, a newcomer at just a year and a half, was overseeing things up front while others played golf.

“Only a handful of firefighters are here,” Csik mentioned. “A third of them are working.”

Russo told ECM it took them “at least six months to organize the event. Then, we got more people to donate and play.”

Eric Stamm said, “San Miguel used to do this. They had 69 people.”

Items in the silent auction included a one night stay at Sycuan Resort with a round of golf, four rounds of golf at different golf courses from different PGA instructors, gift certificates, and clothing among other items.

Lakeside Firefighters Association is Local 4888 of the International Firefighters (IAFF). Lakeside firefighters are very active in the community in which they serve contributing annually to many worthwhile causes. For more information, visit: http://www.lakesidefirefighters.org/?zone=/unionactive/view_article.cfm&HomeID=230290.