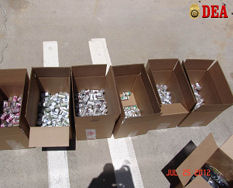 "These drugs are being manufactured and marketed specifically targeting the young people in our community", says Acting Special Agent in Charge William R. Sherman. "The operations that took place here in San Diego and nationally yesterday show the effort being made by DEA and all our law enforcement partners to address this emerging threat by hitting these synthetic drug dealers at every level, from manufacturers to the dealers and keeping these extremely dangerous drugs off of our streets."

During the warrant yesterday at a business called Magic Blends, over 2,800 packages of “spice”, over 4,631 packages of “bath salts”, along with 2 kilograms of Alpha PVP, (the chemical used in the manufacturing of “spice”) was seized.  There were also other chemicals and compounds used to adulterate the “bath salt” products that were being manufactured at the business.  These products were being marketed as “glass cleaner” or “shoe deodorizer” in a way to disguise their true purpose as dangerous synthetic drugs.  The products that were seized had a wholesale value of over $100,000.00 and were being packaged in single use amounts.  There were various chemical receipts and orders for the products that were well into the $100,000.00 range.
Along with DEA/NTF, this operation was worked in conjunction with the San Diego County District Attorney’s Office and the Escondido Police Department.
In 2010, poison centers nationwide responded to about 3,200 calls related to synthetic “Spice” and “bath salts.”  In 2011, that number jumped to more than 13,000 calls. Sixty percent of the cases involved patients 25 and younger.

For more information about this operation and synthetic designer drugs, visit www.dea.gov.