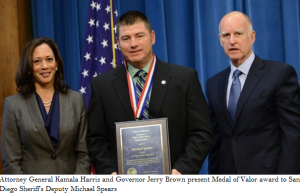 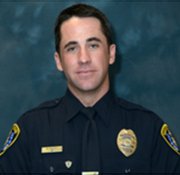 September 30, 2013 (San Diego’s East County) – Sheriff’s Deputy Michael Spears and San Diego Police Officer Michael DeWitt risked their lives to save two deputies who were shot and wounded by a child molestation suspect in Lakeside last September.  The deputies, Ali Perez and Craig Johnson, both survived thanks to their colleagues’ heroism.

On Thursday, Governor Jerry Brown and Attorney General Kamala Harris presented the Medal of Valor – California’s highest law enforcement award – to Deputy Spears and Officer DeWitt for their courage above and beyond the call of duty.

“Character, leadership and being able to act in difficult and uncertain circumstances – that’s what we honor today,” said Governor Brown. “These are the kind of values that we absolutely need to have a society that holds together.”

Attorney General Kamala Harris  stated, “The law enforcement officers we honor today are true heroes. Their actions and courage exemplify the highest level of public service. California is truly a safer place because of them.”

Any award -- even this award “wouldn’t mean anything if (Deputy) Ali (Perez) and (Sgt.) Craig (Johnson) weren’t alive,” said Spears. The fact that they are alive and doing well is his biggest honor, he added.

Perez and his wife surprised Spears by attending as he received the medal. The award ceremony took place a day after the one  year anniversary of that terrifying day. Spears and Perez marked the occasion by having dinner together and thanking God that they were alive, according to a County News Service release.

Officer Johnson was traveling and wasn’t able to attend, but he was there in spirit and heart, Spears said.

“It was emotionally draining. I still remember what happened. That’s tough, but we’re still alive,” he said.

Perez and Johnson were in the lead on that day. They knocked on the door of the suspected child molester and kicked the door in when they got no response. Perez was immediately shot and Johnson returned fire. but was also shot.

Spears was right outside when the shots rang out. He shielded Johnson with his body and pulled him out of the apartment, then kicked in a next door neighbor’s door where they sought cover from the gunfire.

He also  helped cover another officer who went in to rescue Perez. Later, when the wounded suspect crawled out of the apartment, Spears and another deputy held him at gunpoint.

San Diego Police Officer Michael DeWitt, with the Gang Suppression/S.W.A.T. unit, was driving to work when he heard the sheriff shootout and could see chaos in the apartment complex. He pulled over and put his tactical gear on. Then he ran to assist a group of deputies and assembled a team to approach the apartment to rescue Perez.

When a panicked woman with two small children was also running from the apartment right in the shooting suspect’s line of fire, DeWitt ran toward her and picked up her 4-year-old child while she ran with her infant as he led them across the street.

Then DeWitt ran back to help deputies rescue Johnson and Spears, who were still in the apartment next door.

Also honored for going above and beyond the call of duty were 11 Modesto Police Department officers and a California Highway Patrol officer.