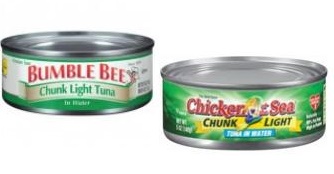 Bumble Bee Foods announced voluntary recall of 5-ounce canned Chunk Light tuna packed in oil and in water, as well as a  four-pack set. The recall includes over 31,000 cases distributed nationally. All were canned in February 2016 with use-by dates in February 2019. The products subject to this recall are marked with a code on the bottom of the can that starts with a “T” (example: TOA2BSCAFB) . View details: http://www.bumblebee.com/

The specific products being recalled, including lot numbers and best-by  dates, can be viewed here:  http://chickenofthesea.com/company/news-room/press-releases/tri-union-seafoods-llc-issues-precautionary-voluntary-recall-on-select-5-oz-canned-chunk-light-tuna-in-oil-and-5-oz-chunk-light-tuna-in-water

Consumers are advised to throw away the tuna and return labels to retailers to obtain refunds.