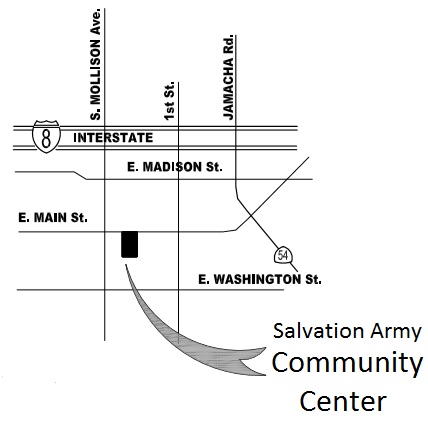 September 30, 2016 (El Cajon) - The Salvation Army is embarking on a massive new building for their 4.6 acre El Cajon Campus. A year and a half ago the Salvation Army started raising money for the $5.4 million expansion to double their 2.3 acre site on South Anza Street in El Cajon from Main Street to Decker Street.

It will include a Food Choice Pantry to reduce waste and counsel clients, a Social Services Center, Teaching Kitchen, Gymnasium and Youth Center, Chapel, classroom and meeting spaces.

Humbert Cabrera announced last week they have raised enough money to secure their first million-dollar match provided by the Zable Foundation, from founder of Cubic Corporation, a San Diego transportation and defense company. Glenn Bernius of the fund-raising arm of the Corp confirmed yesterday that yes in fact, the $2 million has been reached.

If you would like to have a room named after you, now is the time to contact Salvation Army Captain sean.kelsey@usw.salvationarmy.org or 619.440.4683 x402

Humbert Cabrera, a member of the Salvation Army Advisory Board, and El Cajon Candidate for City Council on November 8, 2016, thanked the entire Board of Directors and unveiled his five-point plan on homelessness:  1. Police (embed social workers with police) 2. Money Supply (move the recycling facility outside of downtown) 3. Housing (reducing regulations to the extent as permissible as a Charter City) 4. 3rd Parties (non-profits should communicate better as they do with Crisis House) and 5. Salvation Army.