June 22, 2015 (El Cajon) -- The new KaBOOM playground at Bill Beck Park in El Cajon is complete—thanks to about 200 volunteers who completed the customized playground in just five and a half hours.  As an added bonus, the City also installed a new adult outdoor fitness located next to the playground. 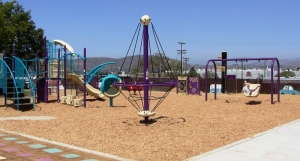 This is El Cajon’s third KaBOOM playground in three years.