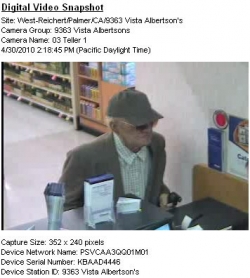 December 16, 2010 (San Diego) --The FBI and several local banks are offering a combined reward of $20,000 for information leading to the arrest and conviction of the “Geezer Bandit.”

The “Geezer Bandit” is believed to be responsible for robbing 12 banks since August 2009 throughout San Diego County, including East County, and most recently, in Bakersfield.

The twelfth bank robbery in the “Geezer Bandit” series is believed to have occurred on Friday, November 12, 2010, in Bakersfield, California.  According to the Bakersfield Police Department, on November 12 at approximately 6:00 p.m., a man armed with a handgun entered the Bank of America, located at 4480 Coffee Road, Bakersfield. The suspect confronted one of the tellers and made a verbal demand for money. After receiving a sum of money, the suspect left the bank on foot. A witness described the suspect as wearing a Halloween style “old man” mask, white fedora style hat, black sports coat, gray slacks, and black dress shoes.

Witnesses from previous robberies have described the “Geezer Bandit” as follows:

The “Geezer Bandit” is believed to be responsible for robbing the following banks: