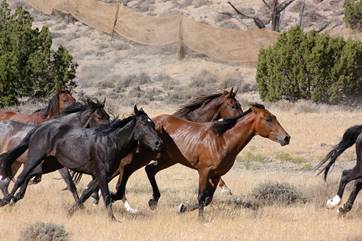 October 17, 2018 (San Diego) – Approximately 1,000 of California’s wild horses are currently being rounded up by the federal government with many at risk of being sold for potential slaughter by the United States Forest Service (USFS). Today, California State Assemblymember Todd Gloria (D-San Diego) and 22 of his legislative colleagues demanded the USFS cease this inhumane roundup and protect these wild horses from slaughter.

“Californians and the American people have made clear that we oppose the slaughtering of horses. It is just plain wrong. That is why I am standing with a bipartisan group of my colleagues to demand the Forest Service immediately cease the inhumane roundup of wild horses,” said Assemblymember Todd Gloria. “It is unconscionable that the federal government would stoop this low and come after California wild horses with the possibility of sending them into the slaughter pipeline.”

Plans published by the USFS document the agency’s plan to permanently remove 1,000 horses from the Devil’s Garden Wild Horse Territory, a federally-protected area, in a helicopter roundup. This is being done so that ranchers in the territory can resume grazing cattle on the public land.

In a letter written by Assemblymember Gloria to the acting chief of the United States Forest Service, Gloria called on the Forest Service to:

"Thank you to California legislators for standing up for the wishes of Californians and all Americans by ensuring that our iconic wild horses are protected on our public lands,” said Suzanne Roy, executive director of the California-based American Wild Horse Campaign. “The federal government must halt this cruel roundup and guarantee that none of these California treasures will be sold for slaughter."

“While this roundup is taking place hundreds of miles from San Diego, we know that all Californians are invested in the humane treatment of wild animals, especially majestic wild horses that have called California’s public lands their home for hundreds of years,” said Gary Weitzman, president and CEO of San Diego Humane Society. “We are grateful for Assemblymember Gloria’s leadership to convey strong concerns about this latest effort by the federal government that does not adequately protect these horses from winding up on a perilous journey to grisly deaths in foreign slaughter plants.”