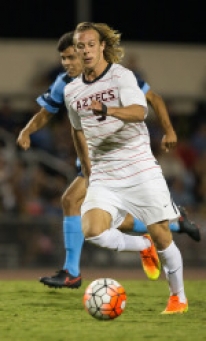 Photo: Michael Sauers tallied his third goal of the year on Sunday to help the Aztecs beat Cal.  Courtesy goaztecs.com

October 16, 2016 (Berkeley, Calif.) - Senior Michael Sauers scored the golden goal in the fourth minute of overtime on Sunday to lift the No. 25/17 San Diego State men’s soccer team to a gritty 1-0 victory over host California in a Pac-12 showdown at Goldman Field at Edwards Stadium.

After SDSU goalkeeper Adam Allmaras made a save of Spencer Held’s attempt in the third minute of extended play, senior Matt Callahan threaded a pass to junior Jeroen Meefout, who headed the ball into the box, where a Cal defender slipped momentarily trying to clear. Sauers pounced on the opportunity and drilled a shot from approximately 14 yards away into the right rear corner of the net as the Aztec bench erupted in jubilation

SDSU also had a chance in the waning moments of regulation, but freshman Daniel Sagno’s dribbler was deflected away by a diving Golden Bear netminder Drake Callender in the 87th minute.

The Aztecs maintained a 14-11 advantage in shots for match, including a 6-2 spread in the first half.  However, Callender made three saves in the period to keep the game scoreless. The Cal keeper stopped an attempt by redshirt freshman Pablo Pelaez in the 41st minute before thwarting a shot by Meefout with under a minute remaining. Conversely, the Bears were unable to dent the scoreboard themselves as a header by Held in the 27th minute hit the crossbar.

Allmaras made two saves on the afternoon, including a stop of another attempt by Held in the 50th minute. With his performance, the SDSU redshirt junior now has eight shutouts for the season and 18 for his career, which ranks fourth in program history.

Pelaez paced the Aztecs with four shots on the day, while Sauers and freshman AJ Vergara finished with three apiece.

San Diego State will close out the home portion of its 2016 regular-season schedule next week when it plays host to Stanford (Oct. 20) and Cal (Oct. 23) in a pair of rematches at SDSU Sports Deck. The Aztecs will battle the Cardinal on Thursday, beginning at 7 p.m. PT, before engaging the Golden Bears once again, starting at noon PT on Sunday. Admission is free for all home SDSU men’s soccer games.