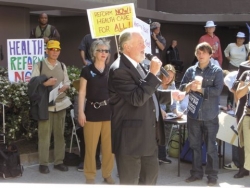 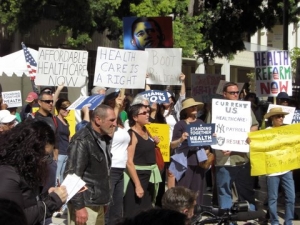 Tracy Emblem and Francine Busby, both Democratic candidates for the 50th Congressional district, attended and spoke out in favor of healthcare reforms. Congressman Brian Bilbray, the Republican incumbent, has voted against the Democrats’ healthcare reform measures.

The House and Senate have passed differing versions of healthcare reform, with the House version containing a public option that was removed in the Senate version.

The two houses of Congress are now wrestling with how to resolve differences, as lawmakers face pressure on both sides of the aisle.  Conservatives oppose both versions of healthcare reform bills passed by the two houses, while liberals voice concerns that the measures do not go far enough to protect consumers.  Liberals have also criticized President Obama for backing down on campaign promises to support a public option.

You can cope with this when you're still young. As we grow older, we are prone to more health problems. At the same time our productivity period also declines. You can suddenly get into financial hassle if you don't have insurance. life insurance