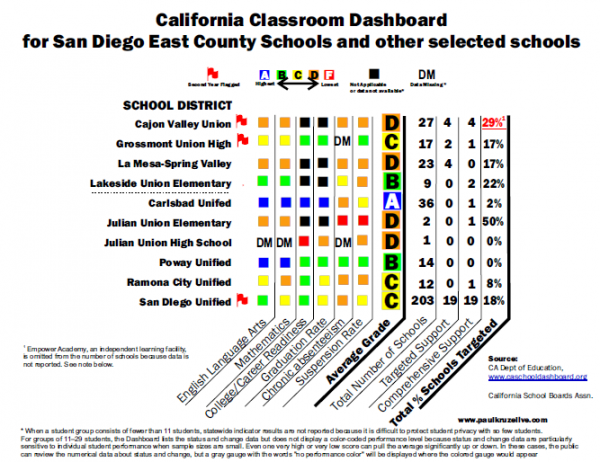 For second year in a row, CVUSD schools are flagged by state for troublesome school performance issues.

May 24, 2019 (El Cajon) -- Listening to Cajon Valley Union School District (CVUSD) Superintendent  David Miyashiro’s “State of the Schools” address on Jan. 15, one might think that all of the district’s education programs are successful and that its student body is thriving. However, a report released in early December by the California Department of Education’s California Classroom Dashboard indicates that despite innovative career path programs, students at 8 of 27 district schools are not measuring up when it comes to college readiness.

Rather than assign letter grades, the Dashboard uses colors to rate schools on six factors including English and math performance, graduation rates and college readiness, although grades can be easily assigned to those colors. It also goes on to rate schools for the performance of certain student demographics groups in those categories. Blue indicates highest performance and red the lowest. In the latest survey, CVUSD received the equivalent of an overall  low “D” grade from the State of California.

It received a “D” in English and mathematics, and a “D” for chronic absenteeism and suspension rates for students identified as African-American, American Indian, foster youth, homeless, and students with disabilities. It has been flagged for a second year in a row as one of a group of San Diego County school districts as needing support to improve their performance.

Across San Diego County, 21 of 42 school districts were flagged for having at least one student category that it was performing poorly in at least two different areas. Cajon Valley had the highest percentage of schools flagged by the state among districts in East County.

The California Classroom Dashboard follows federal law that all states must evaluate and disclose how local schools are performing in terms of academics and other indicators. This gives parents and the public a better idea of what is happening in local schools and districts and helps identify districts and schools that need extra help. It is also used to hold local education agencies and districts accountable for student performance as a component of the “Local Control Funding Formula” law passed in 2013 that has significantly changed how California provides funding to public schools.

According to the state’s website, Dashboard provides information that schools can use to improve their performance under the state’s school accountability system; it also details available overall performance and student group performance on multiple measures of student success. This objective measure can assist parents and district in identifying strengths, weaknesses and areas in need of improvement for local educational agencies and schools.

Federal law also requires states to identify their five percent lowest-performing schools, although the State of California has gone forward and identified eight percent (or 781 schools) as being lowest-performing because of the way it evaluates schools.

Eight CVUSD middle and elementary schools out of twelve have been designated as needing “additional targeted support” and “comprehensive support” by the Dashboard.

In terms of percentage, four out of 27 schools (15%) in the CVUSD, and nine out of 225 schools (8.5%) in the San Diego Unified School District were flagged as needing “comprehensive support.” Overall, 29% of all CVUSD schools measured were flagged by the state.

Although it too has been “flagged” by the California Department of Education for improvement, the Grossmont Union High School District comes up substantially ahead of Cajon Valley in overall performance scores. Both have a high percentage of immigrants and English as a second language learner students.

Of all San Diego county school districts, the Oceanside Unified School District had the highest percentage of schools identified for low performance overall and for student groups. Out of the 25 schools in that district, 44 percent were identified as needing improvement.

The audit comes on the heels of a report released recently by the State of California identifying the lowest performing eight percent of public schools in the state. It includes 58 San Diego County Schools, 14 district schools, and 5 charter schools. The state is required to publish a list of their lowest-performing schools to comply with education standards mandated by the “Every Student Succeeds Act” which came out of legislation initiated by President Obama and signed into law in December 2015. It replaced the George W. Bush administration’s “No Child Left Behind” law which was intended to update the Elementary and Second Act of 1965.

California identifies “low-performing” as any high school that has a two-year graduation rate lower than 67 percent along with others which are in the “red zone” on the California School Dashboard site where the figures are published.

While the Cajon Valley Union School District rakes up recognition for its digital education and its “World of Work” curriculum (which it is marketing globally as a “business,”) Miyashiro bristles at the suggestion that the schools in his district need help.

When ECM editor Miriam Raftery asked Miyashiro after a school board meeting what plans he has to improve the schools flagged by the state as troubled, he insisted that the “metrics of the Classroom Dashboard” don’t apply to his district, insisting the state “measures the wrong metrics.” He cited articles in Forbes Magazine and Hechinger Report on their evaluation “of the excellence of Cajon Valley schools.”

The Forbes article states, “Miyashiro most wants to change the measures of success in education from basic skills to wellbeing. “What parents want from us is to love and care for their children and help them dream about the future,” said Miyashiro. The article profiles the CVUSD district’s World of Work program, aimed at giving low income students a shot at getting or creating careers with living wages. The World of Work innovative curriculum has been commercialized through Eddyware.

According to the Hechinger report, Cajon Valley students learn about 56 different careers ranging from trades to STEM careers.

In a phone interview with ECM, Miyashiro declined to directly address the state’s findings except to mention his district being praised in the two magazines. He repeated his assertion that the Dashboard does not correctly reflect the results of his student’s academic performance “due to our unique curriculum which emphasizes career path and academics.”

According to Transparent California, Miyashiro receives a salary and benefits of $362,140 a year, making him the highest paid Superintendent of schools in San Diego.

A survey of East County school districts conducted by ECM using the Dashboard website found a variety of overall grades below a “B” average.

School districts which have two consecutive years of problems are then “flagged” by the state.

CVUSD had the highest percentage of underperforming schools and received a “D” from the state. In terms of number of schools targeted, specifically, the eight schools targeted by the State of California represented 29 percent of the schools in the district as needing improvement and was flagged by the state. Each of CVUSD’s schools strengths and weaknesses are noted in this chart.

The La Mesa-Spring Valley Union School District had 23 percent of their schools targeted needing improvement but was not flagged.

Although it received an overall “B” grade, the Lakeside Union Elementary School District had 22 percent of their schools targeted for improvement by the state but was not flagged.

Grossmont Union High School District followed at 17 percent of its schools targeted and was flagged.

By comparison, the San Diego Unified School District with its 203 schools had 38 schools (or 18 percent of its schools) targeted for improvement by the state, and was flagged.

Despite a vehement denial of the results of the Dashboard, the CVUSD school board passed a resolution to accept funding from the state because of its low performance audit.

Although the Superintendent and some board members have blamed the state Dashboard’s metrics, ironically, the very organization that Cajon Valley Union School Board president Tamera Otero serves on as vice-president, California School Board Association (CSBA), endorses the California School Dashboard as a valuable tool for districts to improve their performance.

Explaining how the Natomas Unified School District, near Sacramento, school board utilizes the Dashboard, the article states that Natomas USD is a “good example of how districts can apply the data provided in the state’s new accountability system” to assess and improve efforts to close opportunity and achievement gaps for vulnerable student groups.

“It was really valuable to have each principal take ownership of their school’s data,” said Natomas USD trustee and California School Boards Association Legislative Advocate Teri Burns. “It is essential that the district board review the different data points in order to assist schools in targeting interventions — the Dashboard provides an entryway for districts into that work.”

The article continues, “The California School Dashboard is part of an overhaul of public education in the state that aims to consider the whole child and better prepare students for life in an increasingly technological and global society.”

The article leaves little room for school districts to explain away deficiencies in schools’ educational achievements.

“While work remains to be done on improving the Dashboard, the current version can support school district and county office board members in their plans to close persistent achievement gaps. Though all of the equity information is not presented up front, clicking through the different tabs of the Equity Report will reveal subgroups that need extra help.”

But Miyashiro’s ambivalence is of no comfort to Mark Robak, a Cajon Valley Union District parent and an outspoken critic of district who has expressed his views at district board meetings. “As a businessperson I believe in measurable results which the dashboard is and focused on,” says Robak.

After his comments at the Dec. 15 meeting, Robak says that he was approached by CVUSD’s new board president, Tamara Otero, who said that “there was more to it and suggested that there was more to see.”

“I also spoke with David [Miyashiro] at the first school safety meeting and he basically said the same thing. So being that I have seen nothing to the contrary, I'm unconvinced in terms of quantifiable data to the contrary to refute it. Rather more of a feeling that they are on the right track. And I understand they have won awards for their outside the box thinking, which I applaud, but people need to see concrete/measurable results,” Robak says.

ECM requested audio of that Dec. 15 meeting including Robak’s comments, but the district destroyed the recording despite our pending records request. Following a letter sent by Californians Aware legal counsel, the district board has since voted to retain audios for a year and make copies available on request to the press and public.

Finally Miyashiro cannot buy off, manipulate, steer and redline a media source. Check out who owns all the businesses that he brags has elevated achievement. Miyashiro, along with his buddy Otero are guilty of contract fraud!

Unions, Administrators and teachers are the blame. They have taken education to the extreme where historical methods did the job. Back to basics, remove all politics from the classrooms and hold them all accountable, irrespective to the Teachers Unions.
$362,140 per year? That is a hefty salary! Is this 'normal' in California? How much do the teachers make?
Money does not guarantee success and how do you compare "normal" to worth? Yes, he is disgustingly overpaid!