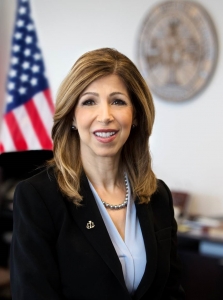 Joined by the San Diego Human Trafficking Task Force, Summer announced that Operation Reclaim and Rebuild was aimed at stopping the sexual exploitation of young women and girls and the cycle of abuse caused by prostitution.

A coalition of law enforcement agencies across Southern California participated in the operation, which included posting fake ads online offering sex for money. When the men showed up at a hotel expecting sex, they were instead surprised by being handcuffed.

The “johns” arrested included men wearing wedding rings, active duty military personnel, and a sex abuse counselor at a local hospital who showed up wearing medical scrubs.  One man came on a bicycle in cycling gear wit a backpack full of sexual props, and another left his dog in the car, which was towed by the officers.

District Attorney Stephans says she hopes to raise awareness that “when people pay for sex, the person on the other end of the transaction is often a victim who was forced into sex trafficking as a child.”

She added that the anonymity of the Internet emboldens Johns to demand extreme acts and believe that they won’t be held accountable. She adds, “They are often more violent than the pimps and traffickers themselves.”

A university study recently showed that the underground sex industry in the San Diego region alone is roughly an $810 million business each year.

This was the fourth year of Operation Reclaim and Rebuild, which this year included law enforcement statewide.

California Attorney General Xavier Becerra states, “Together, we sent a loud and clear message—criminals who prey on young women and children will be swiftly brought to justice.”

as well as those brutalizing women or even men and boys forced into prostitution by human traffickers.  I think that's a good use of my taxpayer money to protect those vulnerable victims.