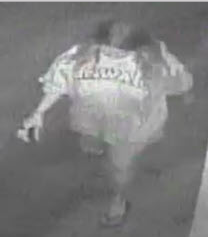 July 8, 2021 (San Diego) - Rewards totaling $2,000 are being offered by Crime Stoppers and the Anti-Defamation League “for information that leads to an arrest” of the two young women who were seen on security video vandalizing the Chabad House at San Diego State University in the early morning hours of Friday, June 25.

At approximately 1:30 a.m., according to a release from Crime Stoppers, “two unknown females walked up to the front of the Chabad House Jewish Student Center” at 6115 Montezuma Road. “One of the females tore a large piece off of a banner on the front of the building. The other female broke the arm off a large metal menorah located on the front lawn. After visiting Trujillo’s Mexican Restaurant, the females were last seen walking eastbound on Montezuma Road toward East Falls View Drive. The total damage to the banner and menorah is estimated at $1,200.” 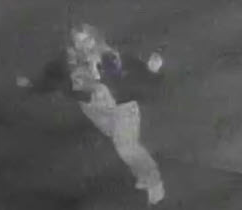 Photo, right:  suspect #2, from security footage
The news release described, “Suspect #l … aa a White female, early 20s, long brown hair, wearing a green sweater with white letters on the front that read “Hawaii,” unknown letters on the back, shorts, and sandals.”  Suspect #2 was described as “a White Female, long brown hair (almost down to the waist), wearing jeans, and a dark colored long sleeve top.”
Furthermore, according to Crime Stoppers, three other women witnessed the acts of vandalism, and San Diego University Police would like to interview them. One of the witnesses “was wearing pants with the left pant leg completely white and the right leg completely black.” 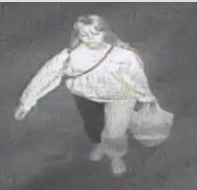 Photo, left:  a witness to the incident, from security footage
San Diego State University Police Detective Traci Stickler may be telephoned at (619) 594-1783 by anyone with knowledge about this incident, or alternatively a phone call may be made to Crime Stoppers’ anonymous tip line at (888) 580-8477. Crime Stoppers is offering up to a $1,000 reward in this case, and the Anti-Defamation League has offered a matching amount.
Meanwhile, a GoFundMe campaign has been raising money for replacement of the menorah, with Rabbi Chalom Boudjnah, director of the Chabad House Jewish Student Center, inquiring on Facebook for recommendations for “an artist we could consult who does metal structures.” Boudjnah, a native of France who last month was naturalized as an American citizen, explained, “we are looking to replace the giant menorah that was vandalized in an antisemitic act at Chabad House.”
“We hope we will find them and that they will learn a lesson,” he told San Diego Jewish World. “Attacking a Jewish Center is not only wrong, but is hurtful to the whole Jewish community, which has been the subject of multiple antisemitic attacks. On the flip side of that we are so grateful for all the love and support that everyone — in and out of the Jewish community — has shown.”
Tammy Gillies, San Diego regional director of the Anti-Defamation League, commented: “ADL takes these types of antisemitic incidents very seriously. There have been too many of them lately at SDSU. We look forward to finding the perpetrators. Antisemitism is on the rise and we should all be concerned.”