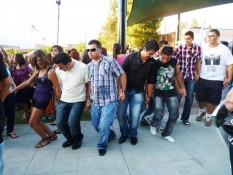 This year’s festival will take place Labor Day weekend (Saturday 4pm-9pm & Sunday 1pm-7pm) at the McGrath Family YMCA in Rancho San Diego at 12006 Campo Road, Spring Valley. The Festival has been moved to the larger YMCA venue to accommodate this year’s greater anticipated attendance compared to the over 7,000 attendees that joined in on the festivities during last year’s inaugural event in downtown El Cajon.

Chaldeans are descendeded from the ancient Mesopotamians, Christians in Iraq.  An estimated 40,000 Chaldean-Americans now reside in San Diego County, with most in East County. San Diego County is also home to more Iraq War refugees than any other city in the world.

For Chaldeans, the Festival represents an opportunity to share Chaldean heritage, culture, music, traditions, customs and food with neighbors and friends from throughout San Diego County.

The Festival is hosted by the Chaldean American Institute (CAI), a new nonprofit focused focus on community development. The mission of CAI is to help Chaldeans successfully assimilate into American society, achieve self-sufficiency, and become productive members of their community.