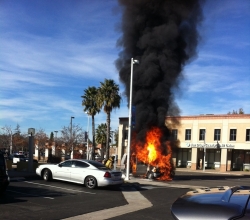 December 29, 2011 (El Cajon) – Patrons of a restaurant helped three women passengers, including an elderly woman in a wheelchair, escape from a burning van in downtown El Cajon today.

View a video of firefighters battling the fire:  http://www.youtube.com/watch?v=Cmu0RRPH2Fg&feature=youtu.be 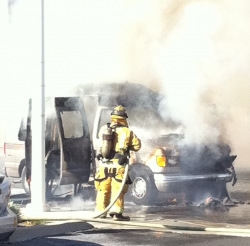 At 1:33 p.m. Heartland Fire & Rescue crews responded to reports of a vehicle fire on West Main Street at Sunshine Avenue in downtown El Cajon. As fire crews arrived on scene they found a van fully involved. Firefighters had the fire out within minutes.

Lives were saved thanks to the quick actions of bystanders who pulled the disabled driver to safety before emergency personnel arrived. ECM news partner 10 News has identified the passengers as Shaysta Aneiro and Rosalyn Johnson.

10 News interviewed Joe Spencer, who was with his 8-year-old daughter when he saw people running toward the van, which had flames coming from the front.

"They were panicking because they couldn't get the wheelchair, so they had to get as many people as possible to get her out," he said. Spencer and five other men pulled the woman to safety. "It was instinctive," he said. "Everybody just rushed and did what they could."

The wheelchair-bound woman was transported to UCSD Medical Center for possible smoke inhalation. The other two occupants were not injured, said Monica Zech, public information officer for El Cajon.

El Cajon Fire Department believes a mechanical issue may have caused a problem, shutting down the vehicle's electrical system.