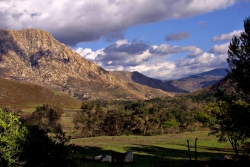 The hikers called 911 at 8:30 p.m. stating that they were lost, had no warm clothes, and had run out of food and water. Using night vision goggles, deputies with the ASTREA 3 helicopter spotted the hikers in a canyon on the southeast-facing slope, but the terrain was too steep and rocky for a landing. Heavy ash from the recent Monte Fire became stirred up by the rotor and reduced visibility, further complicating the rescue.

The ASTREA 3 crew decided a hoist rescue would be safer for the hikers. San Diego Fire Copter 2 was dispatched from its base at Montgomery Field in San Diego. ASTREA 3 remained on scene and, with the use of a laser designator attached to infrared equipment, was able to direct Copter 2 to the hikers.

Copter 2 found the rescue to be challenging as well due to the blowing ash and difficult terrain, the Sheriff’s office reports. Because of these arduous conditions, a higher than normal hover altitude was needed for the multiple hoists required to pick up each of the hikers.

The hikers were flown to El Monte Park where they were evaluated by medical personnel for dehydration. The hikers, all in their mid twenties, did not require immediate medical treatment and were not transported to the hospital.

Listen to our music in Earthwork Music the channel information.