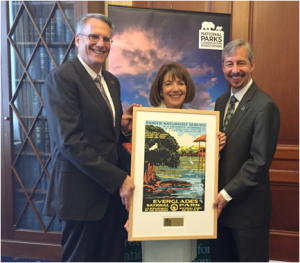 July 17, 2015 (San Diego)—When it comes to protecting national parks, the partisan divide between our local Congressional representatives is as wide as the Grand Canyon.

Three of San Diego’s Congressional members were honored with the Friends of the National Parks Award from the nonpartisan National Parks Conservation Association for their contributions to protection and enhancing America’s national parks. Congressional members Susan Davis, Scott Peters and Juan Vargas all voted to support national parks 100% of the time on bills tracked by the NPCA. California’s two Senators, Barbara Boxer and Dianne Feinstein, also scored 100%.  All five of these legislators are Democrats.

By contrast, San Diego’s two Republican Congressmen, Duncan D. Hunter and Darrell Issa, each scored 0%, voting against every measure to protect national parks that the NPCA tracked in the last Congressional session. That included five measures that passed the House of Representatives, three of which were opposed by the NPCA.

Measures passed with help from Hunter and Issa include bills to weaken clean water protections and cleanup of water pollution impacting 50% of national parks, severely weaken the President’s ability to protect natural and cultural treasures through the Antiquities Act, and remove protections for wildlife on waterways in national parks including Yellowstone, Grand Teton, and Cape Hatteras Seashore. They also voted against a disaster relief bill to restore hurricane damage to national parks and historic treasures and against a bill to protect historic battlefields.

“I’m truly honored to receive the Friend of the National Parks Award,” said Davis. “We have a moral obligation to sustain and preserve our historical landmarks for generations to come. I want to extend my sincere appreciation to the NPCA for its dedication and contributions to our National Parks.”

“This diverse group of representatives and senators from across the aisle and country used their votes during the 113th Congress to stand up for the natural, scenic, educational, historical and recreational opportunities that our parks provide,” said NPCA President and CEO Clark Bunting. “As the National Park System’s centennial approaches, it’s imperative that these champions fight for an increase in park funding, promote land conversation and reduce the impacts of climate change on national parks.”

This year, NPCA tracked votes for three national park-related votes in the Senate and five in the House of Representatives.

Below are the House bills tracked:

This is why we need more funding - we don't have enough reporters or volunteers for all the stories that need research and followup.  If any readers want to make a donation dedicated to this purpose we will gladly dig deeper and reach out to all 5 Congressional reps at least to see what they say. That said, it's not unusual to get no response; sometimes legislators don't want to have to explain certain votes.

I'm wondering if the nonpartisan National Parks Conservation Association knows why the Representatives of both political parties each voted the way they did. I'd love to know why "the partisan divide between our local Congressional representatives is as wide as the Grand Canyon" from sources other than a government printed publications or large, slanted news organizations. That would be a superb follow-up article by the East County Magazine to detail the reasoning from the involved individuals behind the decisions reached for us, the local readers.