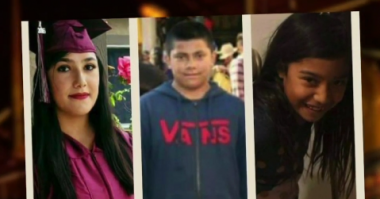 February 4, 2017 (Lemon Grove) – Three young people and several dogs died of injuries in a collision in Lemon Grove Wednesday evening.  A woman and a 4-year-old girl also sustained major injuries.  All of the victims are in the same family and funds have been set up to help the surviving relatives.

Emily Soto, 20, was driving a black Acura that collided with a silver SUV at the intersection of Lemon Grove and Massachusetts Avenue.  Her sister, Lizbeth Soto, 18, and niece, Camila Nava, 7, died.

“She was a great person and everybody that knew her knew that,” Diego Arroyo, boyfriend of Lizbeth, said at a candlelight vigil held Thursday at the scene of the tragedy.  He asked for prayers for the family members who remain hospitalized.

Sheriff’s deputies have indicated that drugs and alcohol were not involved.  One of the vehicles may have run a light, but authorities don’t know which one.

Funds have been established to help the family with medical and funeral expenses: