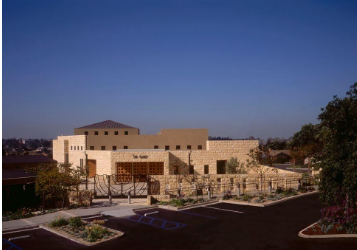 August 30, 2019 (Del Cerro) – Workers preparing a classroom for students set to return after summer break at Temple Emmanu-El in San Diego’s Del Cerro neighborhood this week discovered two bullet holes from shots fired at the building. The temple is located on Capri Drive near College Avenue.

The Anti-Defamation League of San Diego is offering a $3,000 reward for information leading to the arrest and conviction of whoever fired those shots.

San Diego Police are investigating, but it is unknown whether the motive was a hate crime at this time.

The incident comes just four months after the deadly shooting at the Chabad of Poway synagogue, where a woman was killed and three others injured, including the rabbi.  That shooter was taken into custody.

The ADL says anti-Semitic incidents have risen for three state years in California, including a 27% increase last year.

“ADL takes any report of violence against a religious institution extremely seriously and will always commit our utmost effort and resources to security justice for victims,” says Tammy Giles, ADL San Diego’s regional director.  “We hope that by offering this reward, someone with critical information for investigators will be motivated to speak out.”

Anyone with information on these crimes can call San Diego Police Department at (858)495-7900.