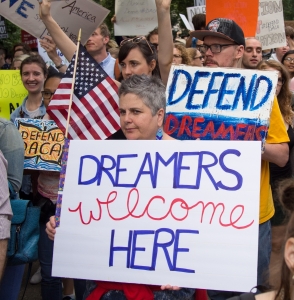 "While the Trump Administration keeps trying to crush our Dreamers’ ability to stay here, we continue to fight to defend their rights,” said Attorney General Becerra, after publication of the latest quarterly report on DACA renewals, which the federal government is required to file as part of the preliminary injunction.

He adds, “We are proud to announce that our success in the courtroom has led to even more of our colleagues, classmates, and family members being able to renew their DACA authorization, allowing them to remain here and work legally. In addition to the 30,000 Dreamers whose applications were renewed earlier this year, at least 45,000 additional Dreamers have renewed their DACA authorization since April and can continue making meaningful contributions in California and beyond.”

DACA prevents deportation of “dreamers,” or immigrants who came here as children and meet the following criteria:

By court order, United States Citizenship and Immigration Services (USCIS) are required to report quarterly data on the number of DACA applications that have been renewed or await a pending decision as a result of the nationwide preliminary injunction Attorney General Becerra secured in January.

The federal government’s updated statistics revealed that at least 45,000 more Dreamers have been able to renew their deferred action and work authorization under DACA, securing two more years of protection. These renewals are in addition to the 30,000 announced by USCIS in their first report in April, for a grand total of 77,190 renewals approved since January 10, 2018.

These young people who came here as children, and are now productive adults, deserve a path to citizenship.