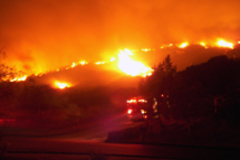 December
7, 2008 (San Diego's East County) —President-Elect Barack
Obama is expected to propose the largest infrastructure-rebuilding program
since Franklin Delano Roosevelt initiated the Works Progress Administration
(WPA) during the Great Depression.  The goal is to put Americans back
to work and revitalize the economy while also repairing roads, bridges, levees
and other public projects.

While fiscal conservatives may oppose massive spending on public works projects,
the reality is that with a Democratic-controlled Congress, the President's
proposed infusion of capital into infrastructure rebuilding is guaranteed to
pass. "So why not have San Diego County's bipartisan Congressional delegation
propose that a portion of those infrastructure dollars be spent to improve
fire safety right here in East County, where the worst wildfires in California
history struck in 2003 and again in 2007?"

Half a million people were forced to evacuate in the most recent fires here.  Wildfires
have cost billions of dollars in property damage and claimed dozens of lives
in San Diego's eastern region in the past five years alone, yet we remain at
high risk for future--and potentially worse--conflagrations.

How about putting Americans to work undergrounding power lines in high-wind
areas locally? "At least three of last year's fires have been blamed on
power lines, according to CALFIRE reports; the state of California and San
Diego County have filed lawsuits against SDG&E to recoup massive losses." No
doubt even the utility company would welcome federal investment in putting
power lines underground -- since this would dramatically reduce the risk
of future fires started by downed or faulty wind-blown power lines.

Obama's administration could also put Californians to work clearing brush
and cutting firebreaks in our backcountry areas -- In the past, prisoners
from five local honor camps were utilized to cut firebreaks and thin brush,
but those camps have all been closed. Since closure, dense brush has contributed
to fires starting in East County and burning into urban areas of San Diego,
including Scripps Ranch and Rancho Bernardo, where hundreds of homes burned
down.

Bark beetles have taken a toll on trees in our local forests, compounding
problems from drought and trees burned in prior fires.  Why not put crews
to work clearing dead trees, which would surely be cheaper than funding cleanup
and rebuilding after yet another horrific firestorm?  Not to mention the
skyrocketing cost of homeowners insurance for people in fire-prone areas --
if they can qualify for insurance at all.


Perhaps funds could also be found to help uninsured or underinsured fire victims
rebuild utilizing fire-safe, energy-efficient and green technologies.  Around
half of the 2003 Cedar victims and over 90% of 2007 fire victims locally have
not yet been able to replace their homes. "Many are unable to afford costs
of new building code requirements, such as widening or paving private roads
to accommodate fire-fighting vehicles."

Obama should also consider funding public works projects to build solar or
wind farms in East County (with appropriate environmental and safety standards
met), as well as helping business owners and homeowners retrofit to install
solar panels and other energy-saving measures as he has recently annonced. "Buildings
use 45% of all electricity in America." Developing energy independence
and reducing greenhouse gas emissions should be treated as national security
priorities. So should eliminating power lines to reduce the risk of wildfires,
which not only threaten the security of East County residents and businesses,
but also provide an easy means for terrorists to strike using nothing more
than a match to terrorize an entire region.

San Diego has an abundance of sunshine. "Solar and wind power could assure
sustainability for backcountry communities that need it most, since SDG&E
has threatened to shut off power during high-risk fire conditions." Many
rural residents rely on electricity to power wells with water needed to sustain
people and livestock -- Shutting off power to wells also threatens water
supplies that can be tapped by firefighters during a firestorm emergency, so
assuring a stable power supply also helps keep our communities safe.

I can think of no more worthy use of our tax dollars than to keep Americans
safe. -- Protecting Californians and residents through the West from wildfires
should rank at the top of infrastructure budget priorities -- right up there
with shoring up levees in New Orleans, repairing failing bridges, and rebuilding
public infrastructure devastated by tornadoes, hurricanes, floods or earthquakes.

If you agree that the Obama administration should make wildfire protection
and "energy independence for East County priorities in its American infrastructure
investment program, take action!" Contact your Congressional representatives
and Senators, using the links in our Citizens' Action Center: www.eastcountymagazine.org/?q=0809soundoff.
You can also visit www.change.org to post
a comment for Obama's transition team, along with a link to this editorial.

After all, the
safety of our community is at stake.

Editor Miriam Raftery is a national award-winning journalist who
has been covering wildfires in San Diego County for the past 25 years.