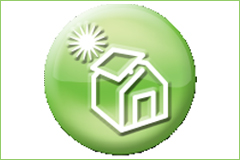 December 7, 2008 (San Diego) — A unanimous vote by the San Diego Board of Supervisors in November requires the County's Chief Administrative Officer to provide county-sponsored legislation making it easier for residential power customers the ability to sell surplus solar energy back to utility companies.

"The individual who has generated the energy gets nothing for it," said Jacob.  "The need for action was brought to my attention by these very customers."  Allowing customers to profit by selling back surplus power generated will provided another incentive for clean and renewable energy, she added.

Currently, state law prohibits homeowners from selling surplus power back to utility companies.  A bill that would have allowed "net meter" utility customers to sell surplus power failed passage earlier this year in Sacramento; however a similar bill is expected to be introduced when the Legislature reconvenes in January.  Utility companies are already required by state mandate to produce at least 20% of power from renewable sources by 2010.

"The state can and should, I believe, allow SDG&E to allow the residential solar towards its mandate," Jacob said adding that she believes our county can meet its energy needs through clean sources, according to a December 4 article in The Alpine Sun.   SDG&E has registered support of legislation allowing residential customers to sell surplus power to utilities at a fair rate.

Sobel observed, "Dianne's proposal is generally referred to as a `feed-in tariff.It is the model that Germany used to become substantially energy independent in only a decade. However, there are other major components.  The Berkeley Plan (which may become Chula Vista's and possibly the City of San Diego's) allows homeowners to buy solar PV (photovoltaic) systems with loans secured by real estate taxes."

He added a cautionary note reflecting today's tough economic climate.  "All of the foregoing will be ineffective, however, without easy credit."  Local bonds to guarantee low interest loans and extensive marketing would help such plans succeed, Sobel concluded, adding, "But we are on the right track."

Churches, schools, fire stations, and other buildings are increasingly erecting cell phone towers or antennas because cell phone companies are willing to pay rental fees of hundreds or even 117-101 thousands of dollars a month—welcome infusions for cash-strapped budgets. But at what cost to the public’s health? There are young children in Mom’s neighborhood, less than one block from the 1Y0-A09 proposed cell phone antenna site. In Sweden, the government requires interventions to protect the public from electromagnetic frequencies. Why isn’t the U.S. government paying 1z0-051 attention to this potential risk to public safety?