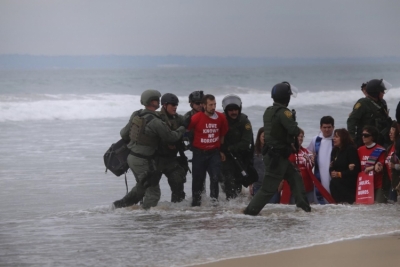 December 13, 2018 (San Diego)—On Monday, 32 people, mostly faith-based leaders from across the nation, were arrested in a peaceful protest in support of migrants seeking asylum at the international border in San Diego.

While most were charged with not following officers' orders and quickly released, Matthew Leber from the American Friends Service Committee representing Quakers was arrested on suspicion of assaulting a Border Patrol agent and kept overnight. But he was released without charges after a video posted by the AFSC shows agents knocking down Leber and taking his backpack, countering officials’ version of what occurred.  View video:  https://www.facebook.com/CAIRNational/videos/338520756967150/

East County resident Jack Shu, president of Cleveland National Forest Foundation, witnessed the incident. “I was standing only 15 feet from Matt when he was arrested,” Shu told East County Magazine. “The media reported that he was arrested for assault when the truth is, it was the Border Patrol that escalated the situation and used physical force when it was not needed.”

According  to an article in the San Diego Union Tribune, a group of 300 to 400 people marched down the beach in Border Field State Park including religious leaders from Christian, Jewish and Muslim faiths as well as indigenous communities.  The group was protesting President Donald Trump’s militarization of the border and sought to show support for members of a migrant caravan from Central America seeking asylum in the U.S.  A federal judge blocked Trump from barring asylum applications, but only a small number of applications are being accepted daily, with a wait list of months. Meanwhile, migrants, many of them ill from camping out in rainy weather, remain in Tijuana, some in shelters, others outdoors.

The Union-Tribune reports that the group read aloud the names of migrants who died on the journey from Central America or at the hands of Border Patrol and immigration authorities.  As they advanced toward barbed wire installed at the border, agents in riot gear formed a human wall and walked forward to force protesters back as the group sang “We Shall Not Be Moved.”

Demonstrators were twice warned with announcements on bullhorns that they were violating federal law and ordered to step back behind caution tape, but a small group refused to do so, choosing to act in peaceful civil disobedience. Some were pushed face down into the sand while officers tied their hands with zip ties, the newspaper reported.  Yet only Leber was, inexplicably, accused of assault.

“Matthew Leber played the role of a peaceful organizer supporting the faith leaders who approached the borer wall from the U.S. side in prayer,” said Joyce Ajlouny, general secretary of AFSC, in a statement published on the organization’s website. “For this, he was targeted with violent arrest and detained by Border Patrol The American Friends Service Committee uniequivocally stands behind Matthew, a trusted colleague who we deeply respect for the skills he brings to the work.”

Leber and others were participating in the “Love Knows No Borders” action organized by the AFSC, a Quaker group that has worked to help migrants and refugees for more than a century and is known for its stands against violence and injustice. The group was joined by congregations from a variety of religious groups across the nation.

Additional events are planned between Huma Rights Day on Dec. 10 and International Migrants Day on Dec. 18 with over 50 solidarity actions across the nation, according to the AFSC.