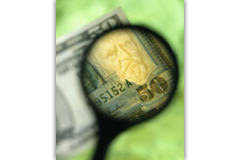 As budgets across the country undergo heightened scrutiny in today's troubled
economy, Governing Board President Bill Garrett praised the district's unblemished
audit record. He noted that both colleges experienced significant enrollment
growth, even as the state began to show strains of a weakening economy. The
last fiscal year also saw an upswing in program offerings, financial aid and
facilities.

For the year ended June 30, 2008, the district's total assets increased $61.9
million or 20.6 percent from the previous year; the majority being based on
increases in capital assets. Total liabilities increased $76.7 million, or
41.4 percent, related mainly to the issuance of general obligation bonds in
2008.  The district's net assets decreased $14.9 million, or 12.9 percent,
due to increased costs for salaries, utilities, financing and other operating
expenses.

The district's general audit by the San Diego-based accounting firm of Nigro
Nigro & White, PC shows no questioned costs and no management recommendations.
It confirms that the college district is fiscally sound and also gives a clean
bill of health to its financial reporting practices.

"In the last couple of years, a number of our senior administrators
in these areas have retired, but as these audits show, our systems remained
intact and our practices continue to be transparent, thorough and valid", Chancellor
Omero Suarez  said. "We continue to deal with the challenge of operating
this district and both colleges on the most stringent of budgets. These audits
confirm that we manage by making sure that every dollar coming out of our coffers
is a dollar wisely spent."

The chancellor said while deliberations continue in Sacramento over a staggering
state deficit, college and district administrators continue to focus on budget
priorities and cost-cutting strategies. "We are looking at what we can do this
year to continue to provide programs and services to a growing number of students
even as we prepare to help absorb anticipated cuts later this spring", he said.
The shortfall is likely to stay with us for a while.

The annual audits by certified public accountants are required by the state
education code. For the past five years, auditors have submitted reports with
no questioned costs on the part of the district. These audit reports will be
available for public viewing at both college libraries, as well as the office
of the vice chancellor of business services

The college is the best in the district and there are not many colleges like the Cuyamaca College which tries to teach the residents as well. It was interesting to learn about all those calculations and hope the cost cutting strategies works out well so that the students benefit from the framed objectives. Chicago condo listings