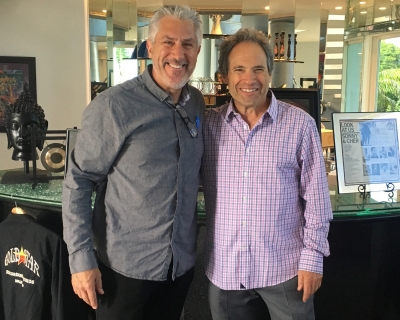 July 19, 2019 (La Mesa) - There is nothing better than to see a labor of love come to its fruition.  After six incarnations, the musical play, 33 1/3 House of Dreams, will be presented at the SD REP during the month of August. It is a “dream come true” for Jonathan Rosenberg and Dr. Brad Ross. The history ofhow this play came about is also interesting.

It all started at the dentist’s office. Since 1989, San Carlos dentist, Dr. Brad Ross, has been and continues to beJonathan Rosenberg’s dentist. For many years, they shared a cordial professional relationship. Ross knew that Rosenberg was a special education teacher/psychologist in La Mesa, but it took some years for him to discover that Rosenberg was also a musician and music historian.

Rosenberg discovered that Ross was the son of a man who was a pioneer in the music industry, Stan Ross. Thus, a deeper and more personal partnership was born as they decided to work together and find a way to honor Stan Ross’s legacy.  Rosenberg and Ross complement each other as the former works in broad strokes; whereas, the latter is into details.

The same could also be said of Stan Ross and Dave Gold,who co-founded Gold Star Recording Studios in 1950.Brad’s father, Stan Ross, was an engineering genius who also had a way with people.  His partner, Dave Gold, a studio design genius, was more of an introvert, but together they made magic. Gold Star Recording Studiosoperated from 1950 to 1984 and during that time, many famous and talented people came through its doors, like the Beach Boys, Phil Spector and Sonny and Cher.  Gold Star produced more Top 40 hits than any other independent recording studio in history. In fact, “Good Vibrations” by the Beach Boys was recorded there.

Some of the artists became personal friends. Sonny and Cher were at Brad’s brother’s Bar Mitzvah. Brad Ross hadwanted to do something to honor his father’s legacy, such as a documentary, so in 2013, Ross and Rosenbergbegan working together. However, they realized that with all the great music, they should embark on writing a musical.

They certainly did their homework, making countless trips to Los Angeles to interview Brad’s late mother, Vera Ross, Brian Wilson, Herb Alpert, Bill Medley, members of the Wrecking Crew [famous studio musicians that considered Gold Star a “home away from home”] and others who had been involved. They discovered that Gold Star was one of the first independent studios that was “color blind.”  African-American artists [Hugh Masekela, Barry White] and Hispanic artists [Richie Valens, Chris Montes] recorded there. Phil Spector created his famous ”wall of sound’ at the studio, including hits such as the Ronettes’ “Be My Baby.”

It took about six years for the play to arrive at the SD REP. An early incarnation of the play that I saw at Lamplightersin La Mesa was in 2015.  However, things really began to gel when both Javier Velasco and Steve Gunderson came on board and brought their talents to collaborate with Ross and Rosenberg. Velasco is the director and choreographer and Gunderson is the musical director. Both Ross and Rosenberg agree that Velasco is the glue and his vision has helped the play come to its fruition.

Although not a Jewish story, there are many Jewish connections and Yiddish is peppered in the script. Ross and Rosenberg made sure of that.  In addition to all the great music, they wanted the play to be about the “story of sound” and to show how Gold Star was a cauldron of creativity and audio inventions earning a place in music history.