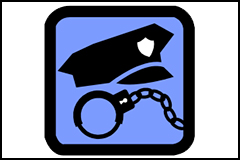 December 18, 2008 (La Mesa) — La Mesa Police Officers responded
to a robbery that occurred at 11:47 a.m. in the parking lot of Toys R Us on
Grossmont Boulevard in La Mesa.

The robber assaulted the woman while she was loading her purchases into her
vehicle.   The victim attempted to use her body to cover the shopping
cart which contained her purse.  The suspect tackled the victim, causing
her to fall over her shopping cart and hit the ground.  The suspect grabbed
the victim's purse and ran away north on Jackson Drive.  The victim received
lacerations and abrasions to her face and was treated at the scene by paramedics.  All
of the victim's property was recovered.

The suspect, Shawn Lamar Brown, 29, of El Cajon has been booked into San Diego
County Jail on a robbery charge.

Such acts are really so disappointing and disgusting. Robbing itself is a crime and holidays are the only times when we get a break from works. He shouldn't have harmed her, robbing can turn into heinous crimes sometimes and this is what gets scary. Causing injury is more bigger a crime. Email stationery backgrounds