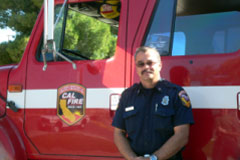 December 23, 2008 (San Diego) —Acting
swiftly to counteract California's latest budget crisis, the County of San
Diego has proposed to temporarily shift some firefighters from County-contracted
stations to ensure that all 18 CAL FIRE stations remain open this year, according
to a press release issued jointly by San Diego County and CAL FIRE.

The state abruptly announced this month that it would slash CAL FIRE's
Southern California budget by $6.3 million ---- $1.2 million in San Diego County
---- because of continuing budget problems.

"This is a one-time, temporary fix to ensure that our region is adequately
protected, particularly during the winter months," said Vice Chairwoman Dianne
Jacob who represents many fire-prone rural communities. "This is not a bailout
or a backfill and we expect that the state will fully fund CAL FIRE next year."

County officials are offering to help prevent the closures by redeploying
firefighters at CAL FIRE stations that the County pays CAL FIRE to operate
through the winter months.

Some crews would be reduced from three firefighters to two. The extra
firefighters would be shifted to help keep all CAL FIRE stations running until
the state restores CAL FIRE's funding in April.

The County would not spend any additional money on fire services and
the staffing shift was offered as a one-time solution until the state can re-staff
fire stations year round.

County and CAL FIRE officials said that temporarily reducing the number
of firefighters to two per station was a better way to protect the public than
closing the stations down.

Captain Nick Schuler of CAL-FIRE called the decision to keep stations open
"great news", but admitted that reducing from three to two firefighters per
station would be "a challenge." To avoid a shortage in manpower per engine,
he explained,  "If someone calls 9-1-1, instead of getting one engine
out to their house, they will be getting two. This is a great example of the
county of San Diego and Cal Fire getting together and coming up with a solution
that will ultimately benefit the people."