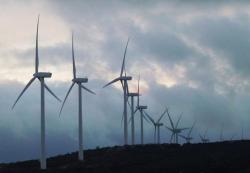 She forwarded a link to an article on a $40 million lawsuit filed against Invenergy by 60 neighbors of the company’s Orangeville Wind project in New York. Neighbors allege that the facility has violated noise limits and caused significant harm to health and property values: http://www.windaction.org/posts/41275-lawsuit-filed-against-invenergy-in-relation-to-orangeville-wind-farm#.VB83JPldV8E.

The suit alleges that the project has created a nuisance that has caused residents to suffer a loss in their quality of life and property value due to the wind energy project.  According to the complaint, wind turbines were built within 800 to 1500 feet of the plaintiffs’ properties. Plaintiffs contend that the project has caused “constant noise, vibrations, and flicker to enter Plaintiffs’ property, significantly impacting the health and wellbeing of the Plaintiffs and causing them to become sick, sore, lame and disabled.”  The projects also destroyed rural views, the suit states.

The turbines regularly exceeded the town’s noise limit of 50 decibels, the suit contends. Invenergy failed to abate the nuisance or engage in mitigating measures, “intentionally continuing the nuisance that they have created.”

Causes of action include trespass, nuisance and negligence.  The suit contends that the Defendant knew or should have known that  its actions would cause excessive noise, vibration, and flicker effect to surrounding homes and properties, breaching its duty of care to neighboring property owners.

The suit seeks $20 million in compensation for personal injuries, lost quality of life and loss in property values and seeks an additional $20 million in punitive damages.

Invenergy has said it will vigorously defend the suit and insists that studies have found no link between sound form wind turbines and adverse health impacts, the Arcade Herald reports.

In fact, however, there is a lack of peer-reviewed science on the issue, though numerous residents living near wind turbines around the world have made similar complaints, including some residents living near the Kumeyaay wind facility in Campo. There have also been numerous anecdotal cases of livestock liiving near wind turbines suffering serious health effects that farmers and ranchers attributed to noise, infrasound or vibrations from the wind facilities.  Recent studies in audiology journals have suggested a link between certain health problems and exposure to wind turbines and Dr Nina Peirpont of Johns Hopkin Medical School has identified Wind Turbine Syndrome as a medical condition.

The comment, "They really have changed life in a negative way and I don't think anyone deserves that." from the homeowner in Orangeville, NY who used to be neutral about wind turbines but changed their mind after having Invenergy build them nearby is very revealing. No business should have the right to make living your life on your own property miserable, especially when they are exceeding existing standards to prevent that from happening in the first place. I hope they win their lawsuit so that the wind industry will be given notice that being a good neighbor really does matter.
It's encouraging to see successful resistance against these abominations. Let's hope that there's real "change" at the top before it's too late. Your government: Destroying nature on the pretext of saving it. http://ceert.org/jewell-unveils-milestone-for-green-energy-development-in-calif-desert/