Story and photos by Miriam Raftery and Leon Thompson 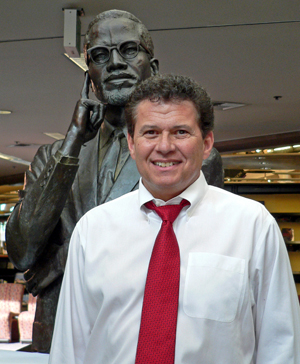 January 20, 2009 — At the Malcolm X Library inauguration viewing, East County Magazine asked elected officials and legislative insiders whether state and local governments are likely to see change as a result of the Barack Obama presidency.

Newly elected Assemblyman Marty Block, who represents the 78th district, predicted California will get help to resolve the state’s funding crisis as a result of Obama’s victory. “I think we’re going to see results quickly. We’ll get federal funding we never got under George Bush,” he told East County Magazine. ”We’re hoping in ten days we will have a budget.” 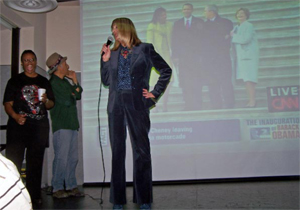 Jamie Leno Zimron, sister of State Senator Mark Leno, agreed that changes will likely be positive for California. “I think there is a general feeling throughout every city, every state, that change has come. We will be working together on every level,” she said. “We will see and hear new kinds of communications and connections so that government will once again work, so that we can all be working once again.”

City Councilmember Donna Frye had two reasons to celebrate. “It’s my birthday - and it can’t get any better!” she declared. As for the Obama victory, she reflected, “Hopefully it energizes the citizens in San Diego with hope and optimism, working together but also making sure that there are opportunities. That doesn’t mean we won’t have disagreements,” she said, chuckling. “One of the things he [Obama] talked about is dissident voices. I often find myself on that side,” she noted, adding that she is often the lone vote for or against measures before the Council. “Now the President is telling people we have to listen to all voices.”

Editor’s note: No Republican state or city officials were present at the event. East County Magazine welcomes observations or reflections from our public officials in all parties.

View our full library of photos from local presidential inauguration events in East County and East San Diego at eastcountymagazine.org/?q=414_inauguration_photo_library.

Watch our video of the inaugural community ball in City Heights at www.youtube.com/watch?v=-U9e-XN7bXs.